HPE CEO Whitman touts focus, IoT and hardware such as 'The Machine'

Hewlett Packard Enterprise CEO Meg Whitman told analysts that she had the power of focus and the company is set to deliver growth.
Written by Larry Dignan, Contributing Editor on Oct. 18, 2016 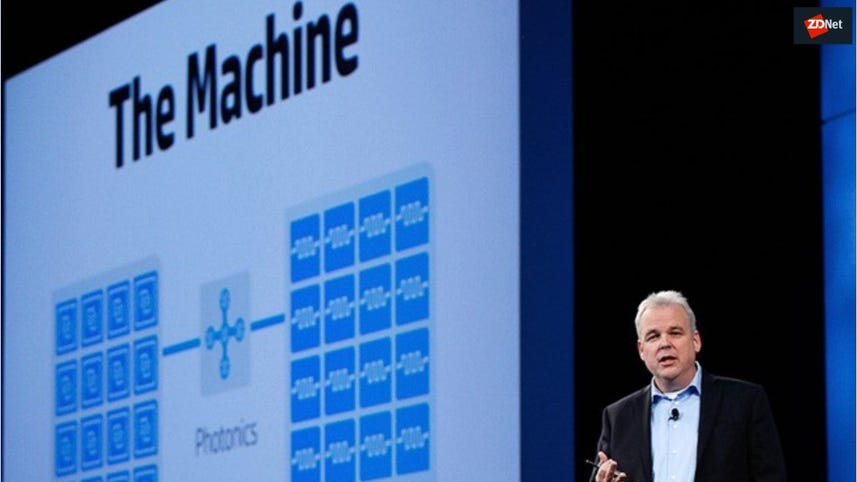 Hewlett Packard Enterprise CEO Meg Whitman said the company will double down on hybrid IT with growth coming in Internet of things infrastructure. The also company plans to grow with product additions from its Hewlett Packard Labs such as a computer that combined memory and storage into one pool.

Whitman said it will invest in composable infrastructure and software defined tools on the hybrid cloud market. Edge devices and IoT will be developed. Whitman added that The Machine project, an effort to revamp computing and memory, is also getting closer to being commercialized. HPE opened The Machine, announced in 2014, to developers in June.

At the company's analyst meeting, Whitman portrayed HPE as a company that's more nimble and can be innovative as it competes with larger rivals such as Dell Technologies. Last year, Hewlett-Packard split into two companies, HP and HPE. HPE then crafted spin-offs of non-core software and services assets.

Whitman noted that the former HP was in a tough spot in 2011 with revenue and profit declines, execution challenges and a weak portfolio. She said the five year turnaround for the company is now complete and there's a foundation for future growth. "We regained the trust of our partners, customers and employees," she said.

"Both companies have the focus and financial resources to respond to a constantly evolving market. If we had been together as one company we wouldn't have invested," said Whitman. "I now have the power of focus. Separating the company was the right thing to do."

Whitman also countered the argument that the company is focusing on commodity hardware. High performance computing, all-flash arrays, converged infrastructure are all "strong and growing markets where HPE is well positioned," said Whitman.

As for public cloud, Whitman said private cloud will also be strong and companies are bringing operations back in house where appropriate.

Here's where Whitman sees the growth:

Whitman also said that HPE has aligned its business based on what customers want.

The hurdle for HPE is to convince its stakeholders that the retooling is complete. Here's the lineup of the moving parts.

"Hewlett Packard Enterprise is in the strongest position it has been since I joined the company 5 years ago," said Whitman. "It has been a journey to get here. We have a clear strategy."