Michael Dell is betting big on scale and a model that he argues can be nimble. HPE CEO Meg Whitman says you can't have it all so focus on speed and innovation. The two sides will duke it out in your data center.
Written by Larry Dignan, Contributing Editor on Sept. 11, 2016 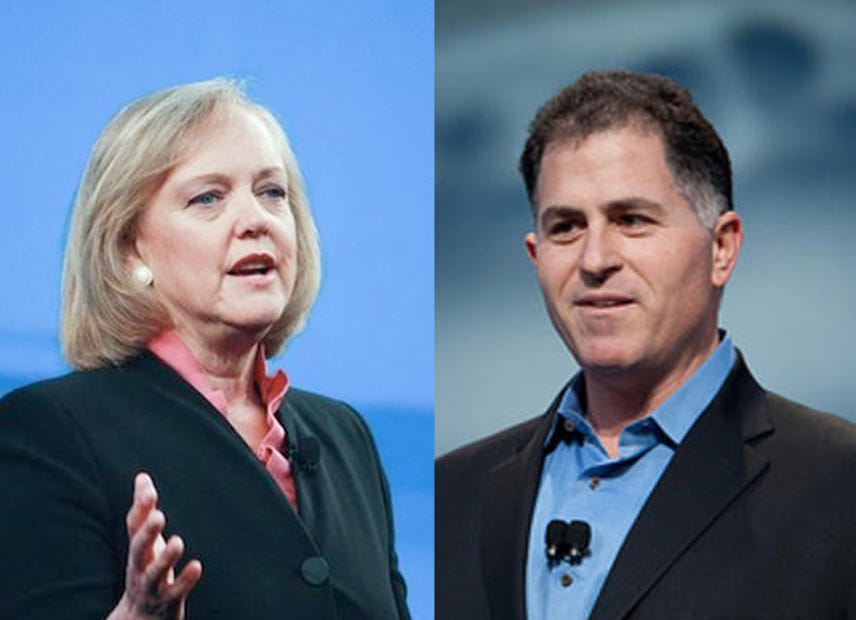 There may be no better technology business model Petri dish than Hewlett Packard Enterprise vs. Dell Technologies in the years to come. Dell Technologies is betting on scale, girth and hopes that a massive company can be nimble. HPE is shedding units as fast as it can so it can focus on the hybrid cloud, software defined infrastructure and move faster that larger rivals.

Less than a year ago, Hewlett-Packard was a soup-to-nuts IT vendor. PCs, printers, servers, networking, storage and services were all under one roof. We know how that turned out. CEO Meg Whitman engineered a split in the name of focus. Hewlett-Packard became HPE and HP Inc., which has the PC and printing divisions.

The sheer breadth of HPE's deconstruction was laid out in a slide. HPE has the spin-merge of its enterprise services division with CSC good for $8.5 billion and a similar transaction with Micro Focus and the software business worth $8.8 billion.

CEO Michael Dell said that his company can "think in decades" and not be a slave to the earnings calendar. Scale still matters, argued Dell. And a company that delivers about $74 billion in annual sales can be nimble, he said. Worries about debt ratios are overblown. However, Thomson Reuters rates Dell's credit risk a 2 on a scale of 100, which is the best a company can have. HPE stands at 65.

The bake-off here is interesting. Let's face of it both Dell Technologies and HPE represent what could be considered legacy IT. Both vendors have larger ambitions. And when you hear HPE's Whitman talk about software defined networking and hyper converged infrastructure there's no doubt that the Dell EMC enterprise unit will battle HPE daily.

I think we're in a great position to compete with both Cisco and Dell. So for example, actually the HPE go forward strategy will be about a $28 billion Company that's only slightly smaller than Dell's enterprise business, and it is more focused with better innovation. I think we should just contrast our strategy with Dell, okay?

So we are getting smaller, while they're getting bigger. And this is important, because I believe speed and agility is critical, in innovation and go-to-market. The second is, they are levering up and we are delivering. We have $5.3 billion of net cash on the operating Company, and we're going to have a lot more by the time we're done with these transactions. And that gives us dry powder. It also gives us the ability to return cash to shareholders.

I think that it's difficult to be levered as much as Dell is in this environment. And secondly, we're leaning into new technology, either through our own innovation, acquisitions, or partnerships, and we've got major focus on our side. What they are doing is doubling down on old technology and a cost take-out play. And listen, I think it might be quite successful for the leadership team there, from a financial perspective. I'm not so sure it's good for customers.

Regarding Cisco. Whitman said Cisco is missing a storage play and that reality will also be limiting as infrastructure converges. Whitman's argument is that the technology supermarket doesn't work. Speed kills today. "Where technology is changing at lightning speed, I've got to tell you the value of focus. I'm seeing it every single day. And so, while maybe back in the day, it was great to be a technology supermarket, like the financial supermarkets of yesterday. What I'm pretty sure of, is the next four or five years, it's going go to be all about speed, agility, and focus and innovation in something that is a more narrow focus," she said.

Where Michael Dell differs from Whitman is he believes that scale doesn't necessarily mean slow. Dell talked about various units within Dell Technologies that operate as startups and growth engines. Pivotal is an obvious example. "A big focus for us will be on remaining nimble as we continue to grow and serve our customers," said Dell.

Bottom line is that Michael Dell believes a company can have it all--especially if it's privately held. Whitman doesn't buy it and HPE's strategy shows it. This business model duel will serve as a fun case study a decade from now.