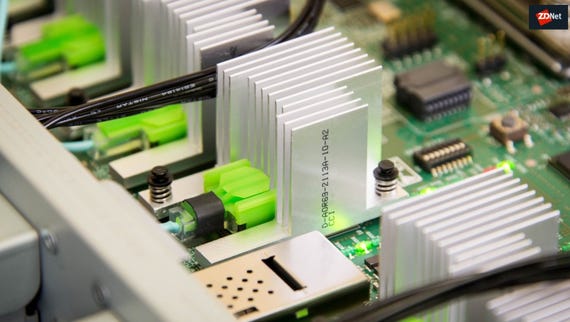 HPE's The Machine is a memory-driven computing prototype
Watch Now

Hewlett Packard Enterprise outlined a prototype system with 160TB of memory with what it hopes will usher in an innovation cadence from its research labs to product.

The effort revolves around memory-driven computing, an architecture that's aimed at big data workloads. This prototype was unveiled Tuesday under HPE's The Machine research project. Memory-driven computing puts memory at the center of the architecture instead of the processor. The goal is to eliminate inefficiencies in how memory, storage and processors interact today to solve problems faster.

Now this memory-driven prototype won't be a product soon, but does illustrate how HPE's move to jumpstart its research and development efforts may soon be bearing fruit. HPE started to look at new architectures to see what computing needs to be as Moore's Law peters out. The Internet of Things, machine learning and artificial intelligence will require new computing models.

Kirk Bresniker, chief architect at Hewlett Packard Labs and HPE fellow, said the memory-driven system highlights how "our labs can successfully turn on and hand over our rackscale prototype." "From here our applications development team will kick the tires," he said.