Could it be that the current working from home and social distancing will change people's tech behavior when they see each other? On this evidence, it's possible.
Written by Chris Matyszczyk, Contributor on July 19, 2020 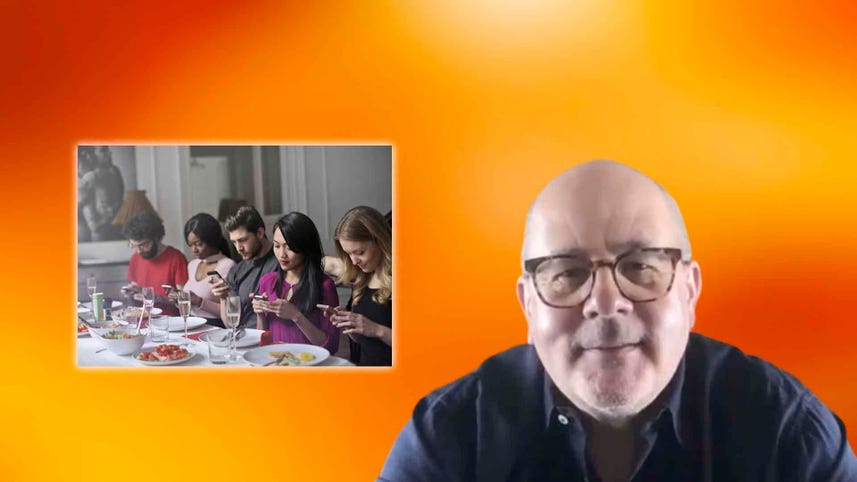 Many people -- including some famous restaurant critics -- believe no one should be going to restaurants during a pandemic.

It's heightening the risk, they say. Not just for yourself, but the restaurant staff too. It also may be forcing servers to come to work when they are in fear and simply desperate for a little income.

Equally, some restaurateurs claim their establishments are as sanitary as hospitals. They say not everyone can make a living while sitting at a computer, so why prevent servers and cooks from doing their jobs?

I understand all these arguments and, on the very rare occasions I go anywhere, try to follow every sane guideline. (A mask isn't an offense to my sense of freedom.)

Then again, I don't want restaurants to die. Most can't survive on takeout and delivery, especially with the likes of DoorDash leeching off their talents. And some restaurants -- especially some staff in those restaurants -- hold a sentimental place in customers' hearts.

In our case, there had been a death in the family, my wife and I were traveling out of necessity, and we decided to go to a restaurant that meant something to us. It was our first dinner out in many months.

Indoor dining is now banned again in California, but this restaurant has a large outdoor space. It's able to accommodate quite a few tables at a considerable distance from each other.

In northern California, there's been an increase in COVID-19 cases. More people have decided that wearing masks is a good and necessary thing. This restaurant had a large sign that explained no one was allowed in without a mask. Everyone seemed to be observing that.

Everything Was Normal. Well, New Normal.

It's hard for servers to be themselves while wearing masks. You can understand, too, if they don't tend to linger at the table, preferring to minimize their contact time with customers. Still, our server, complete with a restaurant-branded mask, was charming and wise.

For us, the mere fact that we were sitting at a table, with other people sitting at tables, was a bizarrely novel experience.

An odd quasi-normality reigned. At least that's what I thought. The restaurant was largely full -- and this was a Monday night. Some sat in larger groups, some in twos.

Yet it wasn't until my wife pointed it out that I became aware of one startling difference.

"Look around," she said. "No one's on their phone. People are actually looking at each other and talking."

That couldn't be the case, surely. I'm so used to sitting in restaurants where there's hardly any conversation unless it's between two or more people, each of whom are holding phones.

A small child, perhaps five years old, sat there not clutching a phone or an iPad. She was actually talking to an adult.

Two young women arrived and took up a table opposite ours. One put her phone on the table. I didn't see her pick it up once. Instead, there they were ordering a half-bottle of wine and engaging in animated chat. At one point, they even turned to us and asked if we were as cold as they were. (I was a little chilly, but at least I wasn't wearing an off-the-shoulder dress.)

My Subconscious Was Affected Too. But Will It Last?

"You're the same," my wife suddenly told me. "You haven't pulled your iPhone out once. We've just been talking all evening."

Clearly, I didn't need to do any of these things. It had become a nasty tic, a habit influenced by technology's immediacy, its tendency to incite habitual behavior, and its all-encompassing eyes and ears.

I don't claim for a moment that this new, phone-free retro restaurant behavior is common or will last. I admit, however, that I found this small, temporary victory for humanity as surprising as it was uplifting.

While Zoom and Microsoft Teams have tried to step in and let us see our co-workers, clients, and Tinder dates, what used to be reality has been quickly forgotten. An immediate assumption is made that what we see now is forever. Just as the belief pervades that technology will overtake everything and we'll soon be cheery robots.

Occasionally, though, there are still vestiges of human wanting human, needing human and behaving humanlike.

Just before we left, a server brought ice cream with a birthday candle to one of the tables. The woman receiving the gift smiled uncontrollably at her man's simple gesture.

"That's so lovely," she said as if this simple gesture was much larger than it was.

Then she added: "I have to take a photo." She pulled out her phone, took the picture, and put her phone away again, resuming her attention toward him.

She didn't feel the need to send it to her friends. She wasn't desperate to put it straight on Instagram.

Productivity
How to land a tech role at Microsoft