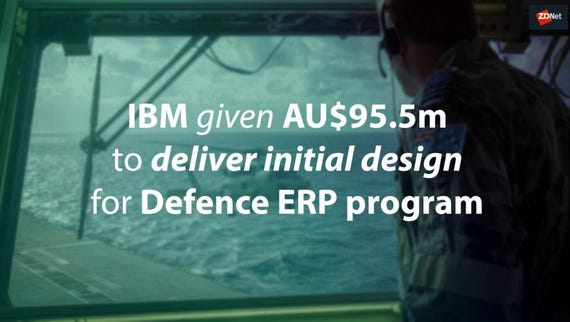 IBM has been awarded a contract by the Australian Department of Defence for the initial phase of its SAP S/4HANA Defence and Security Industry platform.

For a cost of AU$95.5 million, IBM will deliver an initial design of the Defence enterprise resource planning (ERP) program.

"The IBM contract will see the provision of system integrator services to deliver the design phase of Tranche 1 of the capability," Defence said in a statement.

The 18-month contract will also cover the "high-level design for subsequent ERP Tranches and set the foundation elements for finance and human resources".

The ERP program plans to roll out initial capability for finance reporting in 2020, followed by a larger logistics and maintenance capability in 2022.

The program is Defence's largest-scale IT transformation program, with Defence expecting the solution will meet Australian Defence Force demands as it "modernises capabilities and builds high-performing supply chains".

The department said it will also provide a near real-time view of critical information across Defence to better inform decision making.

In July, the local arm of IBM was handed a AU$1 billion contract from the Australian government to be its whole-of-government technology partner. The partnership sees IBM giving access to IBM provide hardware, software, and cloud-based solutions, and also includes joint innovation programs in quantum computing, cybersecurity, and research, touted by the government as furthering its digital transformation agenda.

The agreement means all 17 departments -- even those not incumbent to IBM -- will use Big Blue systems for the following five years.

For the agencies that already have extensive money invested in IBM -- the Department of Human Services, the Australian Taxation Office, the Department of Home Affairs, and the Department of Defence -- IBM said the agreement "improves the current arrangements and gives them the autonomy and flexibility to change the profile of their technology over the next five years".

Speaking at IBM Think in Sydney in May, IBM Australia and New Zealand managing director David La Rose said the Australian government has the potential to be one of the top three digital governments in the world, pointing to the AU$1 billion contract as a way to reach such status.

"I think [this] really demonstrates the way we showed up differently, taking a relationship that has been going on for decades, but principally with four agencies, and expanding that to the full federal government ... to really advance their digital footprint and to take Australia into one of the top three digital governments in the world," he said.

Kinetic IT and Fujitsu walk away with the three deals.

100,000 Defence users have made the migration from the operating system that Microsoft officially stopped delivering support for in 2014.

The company was handed the three-year contract to train 49 of Australia's Defence personnel in cybersecurity.

Join Discussion for: IBM given AU$95.5m to deliver initial design...