It's often said that the human brain is the world's most powerful supercomputer and now a team of computer scientists is looking at the organ as inspiration for building a new, neural network-based supercomputing platform.

The Lawrence Livermore National Laboratory (LLNL), a federal government research facility in California, tasked with ensuring the safety, security, and reliability of the United States nuclear deterrent, is working alongside IBM on what's been described as a "first of a kind" brain-inspired supercomputing platform for deep learning.

The neural-network will be based on IBM's neurosynaptic TrueNorth computer chips. These processors are designed to aid computers in performing cognitive tasks, such as pattern recognition and sensory processing, more efficiently than conventional computer chips. 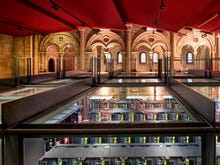 Using ARM chips and Linux, Barcelona center dreams of being 'Airbus of supercomputing' A chapel in the heart of Barcelona Univesity is home to one of Europe's most powerful supercomputers - and a mobile chip-based successor is under development.

That efficiency is made possible because a single TrueNorth processor consists of 5.4 billion transistors wired together in such a fashion that it creates an array of one million digital neurons, which can communicate with each other via 256 million electrical synapses.

In total, the platform will consist of 16 TrueNorth chips and will process the equivalent of 16 million neurons and four billion synapses, while only consuming the energy of a tablet -- just 2.5 watts of power.

"The low-power consumption of these brain-inspired processors reflects the industry's desire and a creative approach to reducing power consumption in all components for future systems as we set our sights on exascale computing," says Michel McCoy, LLNL program director for Weapon Simulation and Computing.

Lawrence Livermore National Laboratory will use the new system to "explore new computing capabilities" surrounding the National Nuclear Security Administration's (NNSA) missions in cybersecurity, control of US nuclear weapons, and, in theory, management of agreements to reduce the number of nuclear missiles in the world.

This will be achieved through the NNSA's Advanced Simulation and Computing (ASC) programme, which is set to be tasked with evaluating machine learning applications, deep learning algorithms, and general feasibility studies surrounding the nuclear programme.

"Neuromorphic computing opens very exciting new possibilities and is consistent with what we see as the future of the high-performance computing and simulation at the heart of our national security missions," says Jim Brase, LLNL deputy associate director for data science, who describes the the potential capabilities of neuromorphic computing as something which can "change how we do science".

"The delivery of this advanced computing platform represents a major milestone as we enter the next era of cognitive computing," says Dharmendra S. Modha, IBM Fellow and chief scientist of brain-inspired computing at IBM Research.

According to Moda, the collaboration between LLNL and IBM will allow both to push the boundaries of brain-inspired computing "to enable future systems that deliver unprecedented capability and throughput, while helping to minimize the capital, operating and programming costs".

Lawrence Livermore computer scientists will collaborate with IBM Research, partners across the Department of Energy complex, and universities in an effort to expand the frontiers of neurosynaptic architecture.