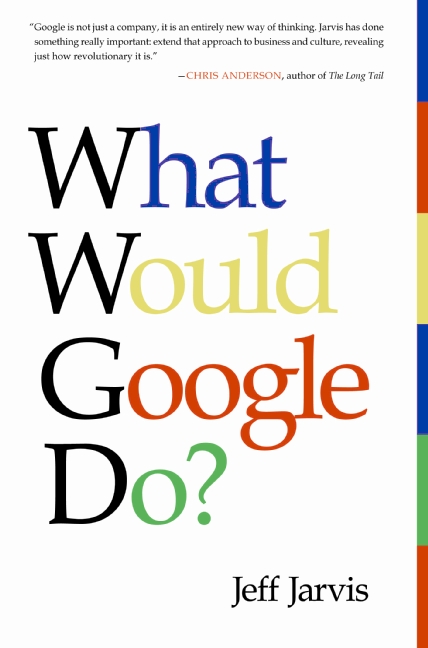 "Google is an avalanche and it has only just begun to tumble down the mountain," according to Jeff Jarvis, new media talking head, Buzzmachine blogger, and recent author of "What Would Google Do?" -- a tech-infused, Machiavellian book that advises you, your company and your industry to study and mimic the online juggernaut, or risk getting buried.

Interviewed by reporter Nick Summers for Newsweek, Jarvis says that in these trying times, imitating those who are successful is the only way to survive:

There is a club of people who've figured out the Internet and succeeded at it...Google is the most appropriate lens, because it's gigantic; indeed the Times of London said that it's the fastest growing company in the history of the world, so who better to use as a lens to this new worldview?

And that means big things for companies and the way they approach their own business models, Jarvis says:

But they'll still need to grow to scale and critical mass, and the way that they can do that, watching Google's example, is by building platforms and networks. So I think that the Google economic model may well be copied even more now than it would have been without a financial crisis...the need to rethink your worldview, and reinvent your business, is only greater now, so the need to follow the example of successful, smart companies like Google is only greater now.

And what about transparency? Google might not disclose its revenue splits very forthright, but the company is still respected as "open." Should everyone's other favorite company, Apple, do the same?

Part of what I define as being Google-y, or really more Internet-smart, is being transparent and open, so that you can be found on Google. There's an ethic behind this transparency that I've learned in the blog world. Should Apple have been more transparent about Steve Jobs's health? Yes, probably. But, health is an issue of privacy.

Of course, there's more in Summers' interview of Jarvis, but that's the crux of his argument -- if you want to avoid future irrelevance, copy and learn from the best. Funny, since Apple and Palm are arguing over this very same (intellectual property) point.

(Also: What about Google's four-year itch? Should that be considered, too?)

Should other tech companies imitate and ape Google? Is it ethical, or does a "survival" environment allow what wouldn't be in less trying times?