Robert Jones and his family have lived in Dubai since 2007 and he has since travelled extensively around the region. He is head of content development for MEED, a leading business intelligence service covering major Middle East infrastructure projects and economies.

In a week where speculating over the future of BlackBerry has become the technology industry's favourite watercooler subject, the company can at least take solace in its ongoing business in the Middle East.

The news broke on Monday that a consortium led by Fairfax Financial had made a $4.7bn bid for the company , following the temporary suspension of trading in the wake of a profit warning and and 4,500 job cuts . 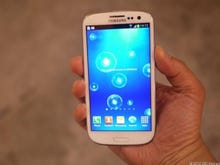 iPhone loses ground to Samsung's Galaxy, but Nokia remains on top in UAE's mobile market In the United Arab Emirates, the mobile market is in flux, with Android on the rise and iOS slipping.

It still remains a sizeable presence in the Middle East, however. The beleaguered manufacturer was the second biggest smartphone supplier by volume in the second quarter of this year, behind Samsung, according to research by analyst group IDC.

However, despite its strong showing, like elsewhere in the world, sales of its Q10 and Z10 were disappointing , accounting for just 13 percent of Blackberry's total handset sales for the quarter, IDC said.

While globally smartphones are outselling feature phones , in the Middle East they now account for two in every five handsets sold. Nevertheless, the volume of smartphones sold is on the way up, growing 16.4 percent year on year during the second quarter.

Android remains the most popular smartphone OS in the region, powering 60 percent of smartphones compared to around 80 percent worldwide.

Samsung, the number one smartphone manufacturer in the Middle East, is also in second place when looking at all handset sales, with a market share of 18 percent overall. Samsung dominates the Middle East smartphone market, however, selling almost half of all handsets, in particular Galaxy S3 and S3 Mini, which between them outsold the more expensive S4.

Sales of Apple handsets fell during the second quarter, accounting for 11.4 per cent of the market. Now that the 5s and 5c are out , Apple handset sales are expected to rise again, although in this region that impact is likely to be seen only in the tail end of the year or early 2014.

The brand here is every bit as popular as elsewhere in the world, with a large grey market for new Apple products in the Gulf states, because there is usually a lag between worldwide launch and availability in the Middle East.

Middle East nations were not among the 11 countries to get the first tranche of 5s and 5c handsets. In the UAE, though, some retailers were shipping them in from Hong Kong and promising availability on day one after launch, provided you were prepared to pay a hefty premium. This included the obligatory Dubai bling of a gold iPhone 5s 16GB for AED6,000 (£1,020).Official launch is expected to be the end of October, although at the time of writing, no official date had been announced.

Look beyond just smartphones and another manufacturer in the news recently holds the number one slot for overall sales. No surprise, it's Microsoft's new phone business Nokia , which sells more phones than any other brand in the region, thanks to its broad range of lower end handsets.

Although the richer countries in the Gulf region, such as UAE, Saudi Arabia and Qatar, have high smartphone sales, the combination of poorer Middle East countries and huge numbers of low-paid expatriate workers from nations such as India, Pakistan and Philippines means that non-smartphone sales continue to be high. And in this market, Nokia is still the cheap handset maker of choice.

Overall, Nokia commands a market share by volume of 45 percent, and pleasingly for its new owners, also saw smartphone sales rise during Q2, to just under 12 per cent of the market, pushed upwards by its lower-cost Lumia offerings.

The Middle East offers manufacturers a strong outlet for new sales. It offers them the mix of wealthy countries that want to buy the latest, top of the line handsets with volume sales of lower-end, cheaper handsets. If, as expected, Microsoft pushes its mobile operating system in to some mid- to lower-end smartphones in the Nokia range, the company could find its niche and by volume at least, begin to attack the dominance of Samsung and Apple there.

Join Discussion for: In the Middle East, BlackBerry and Nokia...