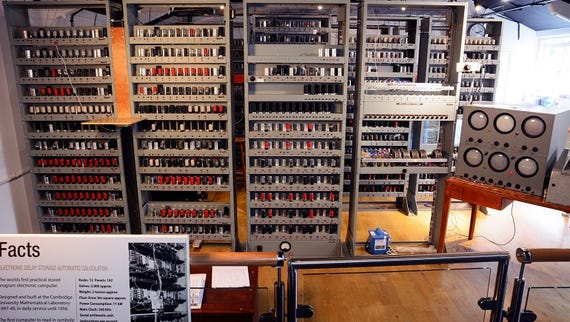 Bringing back the EDSAC, an iconic general-purpose computer
Watch Now

Imagine building a computer you'd never seen, with no plan for putting it together and only grainy black-and-white photos and decades-old memories to guide you.

This was precisely the situation that the British team rebuilding the almost 70-year-old Electronic Delay Storage Automatic Calculator (EDSAC) found themselves in.

The EDSAC was a room-sized relic from the earliest days of computing, and some of the parts that made up the sprawling machine hadn't been available for years, requiring the team to manufacture their own replacements. It's no wonder the project almost never came to pass.

"In terms of building the replica, we didn't have a complete blueprint and when we started there were no circuit diagrams," said Andrew Herbert, leader of the EDSAC Reconstruction Project, an effort staffed by a team of volunteers from the The National Museum of Computing in Bletchley Park.

Designed and built in the aftermath of World War II at the University of Cambridge by a team led by pioneering computer scientist Sir Maurice Wilkes, the EDSAC was one of the first practical general purpose computers, transforming research methods and contributing to at least three Nobel prizes.

The machine stood at two metres tall and occupied a space of four-by-five metres. It performed 650 instructions per second, and effectively computed more than 1,500 times faster than the mechanical calculators it replaced when it ran its first program in 1949. It took twelve racks and over 3,000 thermionic valves -- all to perform a tasks using the equivalent of just 2KB of memory.

The design was later developed upon to create LEO, the world's first business computer -- and thus EDSAC represents an important step in the development of our modern, IT-focused business world.

The ball only started rolling on the rebuild in 2010 following a conversation between Sir Maurice and Dr David Hartley, his protégé at Cambridge. Dr Hartley, who developed the Autocode programming language -- a precursor to C++ -- worked on EDSAC and went on to spend 25 years as director of the University of Cambridge Computer Service among other roles, including the chair of the Computer Conservation Society.

Speaking about that 2010 meeting at an event at the National Museum of Computing, Dr Hartley said he and Wilkes discussed the potential of rebuilding EDSAC, but Sir Maurice was adamant "it couldn't be done". Nonetheless, Hartley investigated if such a reconstruction could be built; he came to the conclusion that with the right information and resources, it could.

Unfortunately, Wilkes would never see the project come to fruition -- he passed away in November 2010 at the age of 97 -- but it's hoped that reconstructing the EDSAC will demonstrate how important this machine was in the history of computing and inspire future generations to pioneer technological innovations like he did.

"It's an early triumph of computer technology. It was the world's first practical machine. It was usable from day one and real scientists used it to solve real problems," says Andrew Herbert, a computer scientist, former chairman of Microsoft Research for EMEA, and director of the ongoing project to reconstruct the EDSAC.

With the machine having been built in the 1950s, the architects and users were essentially flying blind because the EDSAC was one of the first units of its kind and therefore was built in a completely different way to later computers. It's something which is providing the reconstruction team with a challenge and a learning experience as they attempt to get into the mindsets of the original creators and fill in unrecorded details.

"Most of us on the project grew up in the digital age and were taught concepts like logic gates and registers during the first few weeks of our first term of our computer science course. The people who built this, their background was in radio, radar, TV: they had to invent digital thinking and understanding that is very important," says Herbert.

The team is looking to restore EDSAC to how it looked and operated in 1951 "warts and all", but there are problems. For starters, the project began with no blueprints of the original design -- although plenty exist for the machine's successor -- but a stroke of good luck pushed the team in the right direction.

"One of the engineers hired into the maths lab to work on EDSAC 2 was given the job on his first day of clearing out the cupboards. In one of those cupboards, he found circuit diagrams for EDSAC which he took home, but never looked at them," explains Herbert.

"He came here as visitor a couple of years ago, unaware we were doing this, and spoke to the operations telling them they thought they had the drawings, so we visited his spare room and they were helpful."

Rebuilding the EDSAC: The project to reconstruct an iconic landmark of computing history

Almost 70 years after it first ran a program, a team of volunteers are attempting to build a working replica of the EDSAC, one of the world's first general purpose computers.

The blueprints confirmed some of the questions the team had about building the machine and gave them some 'get out of jail free' cards when it came to reconstructing an authentic replica. For example, did this early computer have semiconductor diodes? The technology existed in the 40s but until the blueprints were discovered there wasn't any way of telling if they were used in the machine.

"The circuit diagram showed that Maurice Wilkes certainly had used them, so phew, we could use them too and suddenly some of our services worked better too," says Herbert. "We've tried to be consistent with the photographs and records," he adds, emphasising how they want the reconstruction to look and behave exactly as the original did.

Indeed, the authenticity of not only the design, but also the functionality is one of the key goals of the reconstruction, explains Chris Burton, chief designer for the project and a pre-eminent computer conservationist, who previously played a key role in reconstructing Baby, otherwise known as the Manchester Small-Scale Experimental Machine, the world's first stored-program computer.

"To make it authentic, the view we take is we want it to look the same -- we've got the photos, we've done that. We want it to work the same way; clearly it's very important for a working computer to use the early software, so it's got to work identically the same as the original. We'd like, if possible, for it to be built the same way. These are genuine circuit chassis, they're not dummies, they've got real 1940s technology. It's hard to build," he says.

Often the most difficult aspects of the rebuild weren't even related to recreating the internal mechanics of EDSAC, such as the painstaking process of examining photos to correctly reconstruct the frame of the machine.

"These are things you can do if you know a little bit about the structure of the machine from the documentation and you're faced with a photograph of it as well; you can do the forensics, put things together and gradually work out where everything is," says Burton.

What helped the team solve this conundrum was a collection of 13 glass-plate photographs in a library at Cambridge University. The nature of the images meant it was difficult to see intricate details, but after blowing up high-resolution versions of parts of the photos, the team was able to examine one of the original racks and work out how the unit fit together and where connections are made.

But there are some things that aren't recorded by blueprints and photographs, and for many of these things there just isn't a way for the restoration team to find out what they were like. Some of these things include: knowing how the machine operated, how instructions were given, how to manage the punched paper ticket tapes, and even what noises it made. That's why the project brought together some of those who actually used the original machine in order to gain insight into how it operated on a day-to-day basis.

Joyce Wheeler and Margaret Marrs were two of the original EDSAC operators, who visited the reconstruction alongside Liz Howe, an operator of EDSAC 2, and were able to provide the current EDSAC team with valuable insight into how the machine operated.

"There were notes describing EDSAC and I remember going to the lab to read it all through and to do the exercises at the back. They were very important in learning how to program," said Wheeler, who at the time of operating EDSAC was an astronomy student teaching herself to program, at a time when people were essentially learning to code for the first time. The machine arguably represents the birth of modern programming, with the system used for tasks that would become common computing workloads.

"My husband, David Wheeler, and research student Geoff Cook, had set up the machine to seek prime numbers when the engineers wanted to run something. They would always use their prime numbers program during quiet periods and each time it would restart where it had left off," said Wheeler.

Margaret Marrs was also able to shed light on the workings of the machine that just wouldn't have been apparent from looking at a picture or a blueprint. She confirmed that the original EDSAC machine had a loudspeaker and even demonstrated the noise the machine made at crucial junctures, such as when a calculation was complete.

Of course, modern computers don't require loudspeakers, or ticker-tape, and can do much, much more than handle one process at a time. So why bring the EDSAC back? Because the basic processes and parts are the same as a modern computer and can be used to teach the programmers of the future how computers work at a fundamental level.

"This is a wonderful teaching aid. It's the only computer where you can walk round the inside of it and say 'that's the clock, that's the memory, that's the boot device' and get a feel of how all the parts of a computer interact which each other," says Herbert.

"You can't do that looking at a chip down a microscope. It's not so easy to see how all the parts talk to each other, but here it's obvious because you can walk around it."

The EDSAC reconstruction project is ongoing but is open to visitors to The National Museum of Computing. The rebuilt machine is expected to be fully completed and operational in autumn of 2017.

Read more on the history of computing

Join Discussion for: Inside the project to rebuild the EDSAC,...