The co-founders of Instagram, Kevin Systrom and Mike Krieger, have resigned and are leaving the photo-sharing app company.
Written by Chris Duckett, Contributor on Sept. 24, 2018 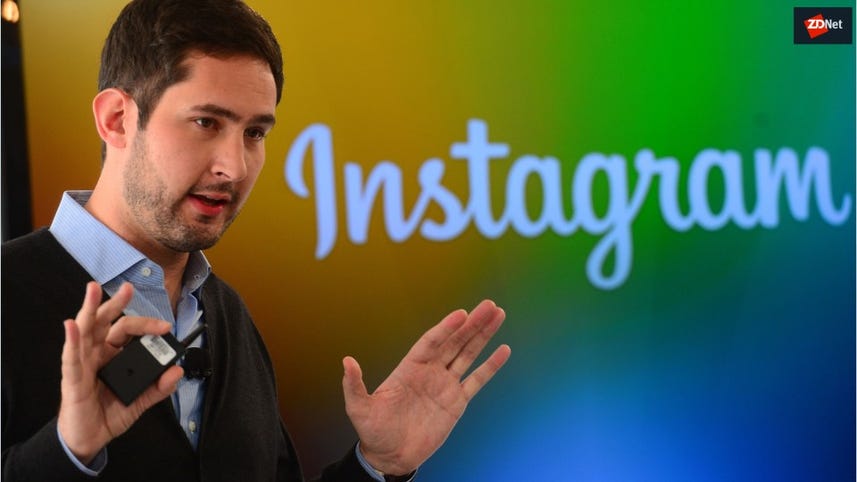 Instagram co-founders Kevin Systrom and Mike Krieger are stepping down from their respective roles as CEO and CTO at the image- and video-sharing giant, which is owned by Facebook.

Systrom confirmed the move in a blog post Monday evening, following an earlier report by The New York Times about the duo's departure.

In the post, Systrom said he and Krieger plan to take time off "to explore our curiosity and creativity again".

Systrom and Krieger, fellow Stanford alums, founded Instagram in 2010. Facebook acquired Instagram two years later for $1 billion -- and it has since grown to a community of more than 1 billion monthly users.

"Mike and I are grateful for the last eight years at Instagram and six years with the Facebook team," Systrom wrote.

"We've grown from 13 people to over a thousand, with offices around the world, all while building products used and loved by a community of over one billion. We're now ready for our next chapter.

"We're planning on taking some time off to explore our curiosity and creativity again. Building new things requires that we step back, understand what inspires us, and match that with what the world needs; that's what we plan to do."

The pair's departure raises uncertainty over the future of Instagram, which has been able to sustain a dramatic growth trajectory while largely avoiding headaches that have befallen its parent company.

Facebook has been the target of US government investigations into how its platform has been used to manipulate the 2016 election and the misappropriation of user data by consulting firm Cambridge Analytica.

"When Instagram joined us, the team had only 16 people," Facebook CEO Mark Zuckerberg said on the company's Q2 earnings call July 25.

"We believe Instagram has been able to use Facebook's infrastructure to grow more than twice as quickly as it would have on its own. A big congratulations to the Instagram team -- and to all the teams across our company that have contributed to this success."

Instagram has become a key contributor to Facebook's growth and profits, and is growing at a faster rate than Facebook.

Systrom has credited Facebook's ownership with fuelling the growth of Instagram and helping it quickly launch new features, like live-streaming video.

Last month, Facebook launched new tools to allow users to manage the time they use within Facebook and Instagram apps. The apps now have an activity dashboard, a daily reminder, and a limit on notifications. The move followed similar ones made by Apple and Google to address phone addiction.

In June, the company launched a vertical video platform dubbed IGTV, which the company claimed was its "most exciting feature to date". IGTV is available on iOS and Android from within Instagram's eponymous app, or a stand-alone app.

In June, Facebook owned up to exposing the private posts of 14 million users over the span of a few days during May. From May 18 through May 22, any posts made by the 14 million users in question were automatically made public regardless of what privacy settings the user had, due to the social network testing a new feature that allows users to share posts publicly. By May 27, Facebook said it had fixed the issue.

"To be clear, this bug did not impact anything people had posted before - and they could still choose their audience just as they always have," chief privacy officer Erin Egan said in a statement at the time. "We'd like to apologize for this mistake."

See: How to be a social media team of one: 7 tipshttps://www.techrepublic.com/article/how-to-be-a-social-media-team-of-one-7-tips/(TechRepublic)

With Europe's General Data Protection Regulation (GDPR) due to come into force in April, Facebook took steps to minimise the number of users that would be impacted by it, and moved 1.5 billion of its 1.9 billion users resident in Africa, Asia, Australia, and Latin America off a prior user agreement with Facebook Ireland.

The company said it offers the same privacy controls to users regardless of whether they are covered by the GDPR.

By contrast, Microsoft said in May that it is offering GDPR-style rights to all of its users.

"We will extend the rights that are at the heart of GDPR to all our consumer customers worldwide."

As Facebook continues to mop up following the spillage of data on millions of users by Cambridge Analytica and other data firms, a Pew Research poll found that 54 percent of those surveyed had adjusted privacy settings; around 42 percent had taken a break from Facebook of at least a few weeks; and 26 percent said they had deleted the Facebook app from their mobile phone.

Pew found that 44 percent of users between the ages of 18 to 29 said they deleted the Facebook app.

With its new long-from, vertical video app, marketers have yet another way to reach Instagram's vast audience.

Instead of complying with Apple native app rules, Facebook's Instagram is ditching its Apple Watch app in favor of notifications.

Instagram hack is locking hundreds of users out of their accounts

Recovery options are being changed to .ru addresses by an unknown threat actor.

Instagram IGTV: 3 ways businesses can use the new service (TechRepublic)