Autonomous vehicles are really about the compute back at the data center. Intel's Mobileye acquisition is more about controlling its own destiny for data centers on wheels.
Written by Larry Dignan, Contributor on March 14, 2017 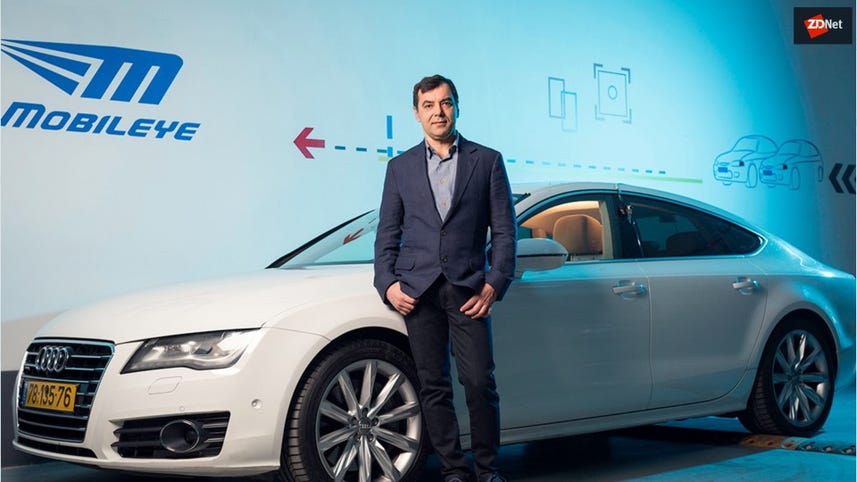 "These cars are going to require higher and higher levels of connectivity and larger and larger amounts of data center and cloud computing as you are starting to increase the mapping requirements, the learning and algorithm improvements as we continue to drive this autonomy and move forward." -- Intel CEO Brian Krzanich after his company said it would acquire Mobileye for $15.3 billion

The theme of the autonomous vehicle being a data center on wheels popped up repeatedly as Intel talked about autonomous vehicles. For Intel, cars and Mobileye's computer vision technologies are the ultimate Internet of Things play. Computing will have to be offloaded to the cloud where Intel is essentially an ingredient brand just as it was with PCs.

While the logic of buying Mobileye makes sense, Intel's acquisition was as defensive as it was offensive. The concern is that companies like Nvidia and Qualcomm can use ARM-based processors in automobiles and edge devices and leverage their way back to the lucrative data center and cloud market. Nvidia is already there as its GPUs make inroads into data centers and high performance computing. Qualcomm bought NXP for its auto industry footprint and outlined ARM servers with Microsoft last week.

Krzanich is right that the stack from the automobile to the home, city, cloud, and data center will be one continuum. What's unclear is how the spoils will be split.

It wasn't hard to find analysts who saw Intel's Mobileye purchase as one that was largely defensive. Jefferies analyst Mark Lipacis said in a research note:

Intel's Mobileye announcement follows its recent acquisitions of Altera, Nervana and Movidius (we estimate for $16.2 billion total), as well as its announced intent for increased capex for memory. At the same time, its data center group revenue growth has decelerated to 8% recently from mid-teens, and it appears that Nvidia's parallel computing platform is emerging as the solution of choice for deep learning in the data center. Intel's use of cash for M&A and decelerating data center growth makes us concerned that the data center processing market is drifting away from Intel's strength in x86 processing.

That take may be a bit overstated. Intel remains a data center powerhouse, but it's clear that cloud providers want alternatives such as ARM. IBM's OpenPower group has a bevy of heavy hitters all looking to offset Intel's data center power.

Another way to view the Intel-Mobileye deal is to see it as a way to cut Nvidia off at cars and then slow the company down in the data center. Cowen analyst Timothy Arcuri noted:

The processing section of autonomous cars is quickly coming down to a two horse race with Nvidia as the main competitor to the Intel-Mobileye partnership. Nvidia is clearly on the offensive on multiple fronts including 1) data center, 2) machine learning, and 3) autonomous cars. This has put Intel on its heels and this deal is consistent with a defensive posture.

Arcuri explained that higher levels of autonomy in cars will need more powerful chips. Google's self-driving cars rely on multiple Xeons. Those Xeons complete the car to data center connection in many ways.

However, should Nvidia win more deals it'll be able to close the car to data center loop. "Ceding the autonomous car market to Nvidia would also have edge compute and eventually data center implications, as whatever solution becomes dominant will likely spread to other non-car intelligent connected devices and could define the type of data sent to data centers and perhaps shift the optimal type of compute towards or away from general purpose compute," said Arcuri.