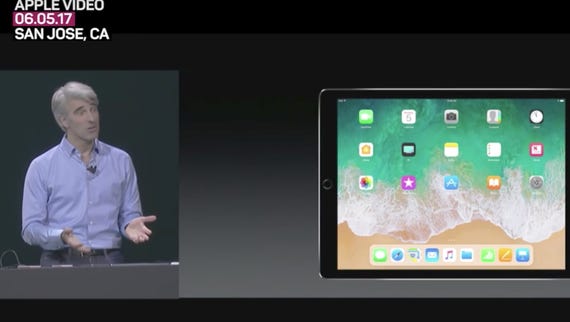 Apple on Monday announced significant changes are coming to the iPad's operating system this fall with the release of iOS 11.

The changes demoed on stage made it clear Apple is working hard at changing user behavior -- and perhaps, more importantly, perception -- of the iPad lineup. Instead of viewing and using the device for watching movies or passively checking email, Apple wants users to treat it as a computer. Or as ZDNet's Ross Rubin puts it, with iOS 11, Apple's iPad has a grown up.

As someone who used to work primarily on an iPad Pro, and eventually grew too frustrated with the lack of meaningful updates to improve the computing experience, I am very intrigued and hopeful about the changes in iOS 11.

The new app switcher, for example, makes it easy to visualize what you are working on and quickly find apps. Drag and drop eliminates unnecessary steps to share text or photos between documents and apps. The Files app will eliminate the need to bounce between apps to find a document.

These are all things I've wanted on the iPad Pro from day one.

However, there's one feature I'm disappointed not to see in iOS 11: Multiple user support.

Sharing a computer is commonplace among families, and why should the iPad line be any different? From a feature and perception standpoint, the iPad would certainly benefit from it.

Proper multiple-user support on an iPad is no doubt a tricky feature to figure out. Allocating storage, managing user accounts, and app installs all have to be taken into account.

Yet, Apple solved those engineering challenges with Shared iPad for classrooms in January of 2016. As each student logs into his or her assigned iPad, the device will download apps, homework, and assignments. In other words, the device looks and works just as the student left it.

It's unfortunate Apple hasn't yet decided to bring the same feature to the iPad for the average user, outside of a classroom.

Perhaps the combination of releasing a $329 iPad to spur purchases amid a consistent decline of tablet sales is enough motivation to not release a feature that will surely cut back on the number of tablets sold.

It's difficult to say why Apple continues to keep an important computer-like feature from the iPad lineup, but maybe, hopefully, one day soon, the iPad will gain one of the last features on my personal checklist for it to truly replace a laptop.

Join Discussion for: iOS 11 on the iPad Pro is still missing one...