With iOS 11, the iPad finally grows up

The product launched to fit between a smartphone and laptop has shifted hard toward the latter. But it's too late to make amends for its misspent youth and overtake Windows 10 2-in-1s.
Written by Ross Rubin, Contributing Writer on June 7, 2017 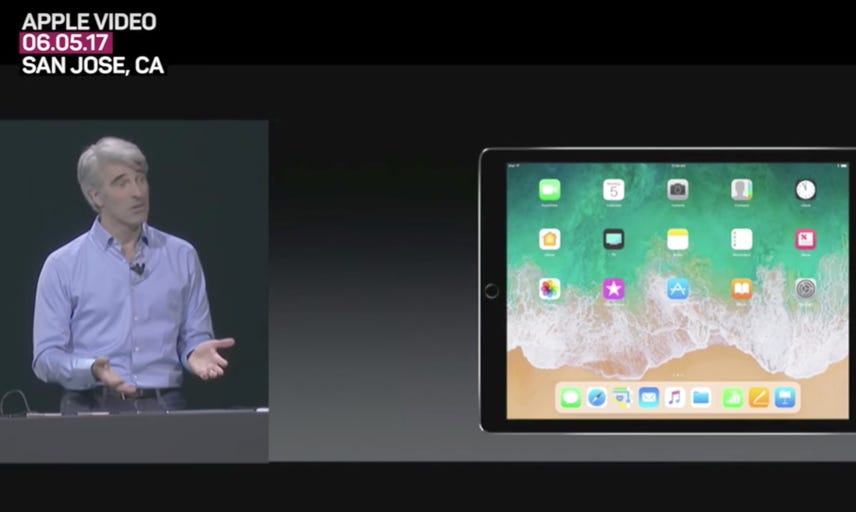 Characterizing the iPad as a big iPhone was once a running joke. But for years after its launch, the joke was on those who underestimated Apple's tablet as it enjoyed a meteoric rise.

Soon, though, like the netbooks that it once marginalized, iPad sales started to drop as the devices that it was originally positioned between began to squeeze it. Larger smartphones cut off market expansion opportunities for the mass market content consumption opportunity. And the Windows world struck back against Apple's characterization of the future of computing with a mix of less successful slates and more successful 2-in-1s.

I miss Steve Jobs and his 'Reality Distortion Field'

The modern Apple keynote is packed with Darth Vader and special effects and TIE fighters and explosions and weed jokes, and there's not a moment to catch a breath.

iPad sales have continued to shrink, but it hasn't all been bad news for Apple's tablet. The device has proven useful, cost-effective even, when compared to a host of paper-based processes for businesses. Therefore, while the number of iPads sold has been shrinking, the revenue per iPad has grown as business users have found the device useful for productivity without having to be tethered to a table.

From its inception, Apple had sought to differentiate the iPad by optimizing its own apps for the larger display as well as encouraging third-party developers to do the same. On several occasions, the company would show off how much better apps such as Twitter looked on the iPad versus Android tablets.

But particularly as the market shifted more toward productivity, the device has needed to overcome its reputation for not being suited for "real work."

Apple's first foray into making the iPad more competitive with laptops came with iOS 10, in which the company introduced both "mutitasking" (static viewing of background apps) and split-screen mode.

With iOS 11, the company has expanded on that by making all background apps active and even allowing a third "floating" app to be moved into the the display. Apple has also added a range of drag-and-drop functions that preserve the tablet's "full touch" experience even if they require some more dexterity from one's digits than has previously been needed by the multitouch interface.

Apple also added a universal Files app that goes a long way toward making working with documents more familiar to PC and Mac users and bridges a feature gap with Android and Windows.

It's also a bit odd that Apple -- so high on the value of apps -- wouldn't recognize the importance of using them together as they are used on the Mac. Perhaps the skew of the app store to games, which operate in their own silos, is to blame.

The changes may also have come too late to redeem the iPad mini, where they could have helped it compete against encroaching phablets.

For now, the improvements look significant enough so that anyone who has been on the cusp of using an iPad versus a laptop should give the iPad a fresh look. Particularly when equipped with keyboard and Apple Pencil, the refreshed Pro enables a creative computing experience that allows more to get done on the go than has ever been possible with an iPad.

Unfortunately for Apple, the same can be said for Windows 10 2-in-1s.

Apple
How to improve and enhance the Windows 11 Taskbar