iOS 14: Our favorite features, plus how to test the beta

Apple has announced iOS 14. It will bring a major refresh to the home screen, minimized call notifications, pinned messages, an enhanced map, and more. Here's our pick of the top features, including how you can get started trying them now.
Written by Elizabeth Mauder, Video Producer on June 24, 2020 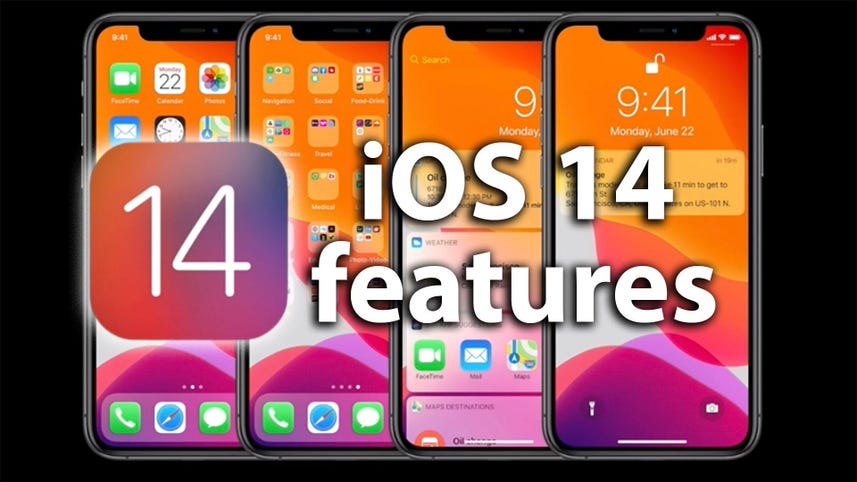 Apple officially introduced iOS 14 at WWDC 2020, giving us a good look at all the changes coming to the iPhone. To help sort through all of the new features, ZDNet has rounded up our favorite iOS 14 announcements. Watch the video above or read through below to learn more about the latest updates. We've also included how to get the beta.

Here are a few of the more notable features included in the iOS 14 software update that's due out later this year:

The home screen received a major refresh. Widgets can be added to the home screen and customized for work, travel, entertainment, and whatever else you might need. You also now get an App Library, a new space that automatically organizes your apps. Your phone will intelligently surface frequently used apps and apps it thinks you might need at the moment, as well.

Apple finally implemented a feature many iPhone users have been asking for: A minimized incoming call notification. iOS 14 will no longer use a full-screen notification style for calls and FaceTime calls. Instead, the caller's name will appear at the top of your screen, giving you the option to answer, decline, or simply swipe the notification away, so you can continue with your business.

It's not hard to let your messages clutter up when you go months without deleting threads -- we get it. To help combat that, Apple is making it easier to find your favorite contacts. With iOS 14, users will be able to pin messages at the top of the app, making it breeze to stay connected with important conversations. You can do the same with group messages, which are also receiving their own unique updates. For instance, you will now be able to reply in-line within a group message and can directly mention someone, sending them a direct notification.

Maps have been revamped, with seamless integration to all your Apple devices. You now can choose and manage bicycle routes through a new cycling feature. Your cycling route will take into account elevation, how busy streets are, and will tell you when you're approaching stairs. Maps are about to become more eco-friendly, too, by incorporating electric vehicle routes to help you plan trips based on your vehicle's charge and charger types.

Siri is getting a redesign, enabling it to pop up on the page rather than move to a separate screen. It's also getting new features, including better translation functionality and a knowledge boost. You'll also be able to record and send audio messages using Siri.

A new Translate app will launch with iOS 14, offering translations -- by voice or text -- in 11 different languages. The app will work offline and use Apple's Neural Engine. Apple said turning your iPhone to landscape mode will initiate conversation mode, allowing it to automatically detect which languages are being spoken.

Apple CarKey will arrive with iOS 14, allowing you to use an iPhone or Apple Watch to unlock and start your car -- if it uses NFC. You can even share digital car keys via Messages. Car keys will only be supported by certain cars and devices, however. At launch, iPhone XR and iPhone XS and newer and the Apple Watch Series 5 will support it.

Apple will let you set third-party apps as your default apps over Apple's own apps in iOS 14. You can set Chrome or Gmail as your browser and email app, respectively.

The iOS 14 developer beta is now available for developers to test. A public beta is expected to arrive in July 2020, followed by an official release later this fall for everyday iPhone users.

Be sure to let us know what you think about iOS 14 in the comments!

Mobility
The iPhone 14 will lag behind flagship Android smartphones