iPhone sales have had a really bad quarter, claims a report by market intelligence provider TrendForce.

According to the report, sales of the iPhone have fallen by 43.8 percent, down from 75 million units for the previous quarter to just 42 million units in this quarter. Part of this decline is being put down to sales of iPhone 6s being lackluster because the model "lacks exciting new features."

"As the budget model, iPhone SE will support Apple's overall shipments in the second quarter before the next major iPhone release," wrote TrendForce analyst Avril Wu. "However, iPhone SE is going to face severe price competition from Chinese branded products in its target market, which is the mid-range device segment. This year's iPhone SE shipments are projected to come in below 15 million units and they are unlikely to help turn around the weak annual shipment result for Apple."

If these figures are anywhere near accurate, this would mean that Apple is hemorrhaging market share, down to 14.4 percent from 20.9 percent for the year-ago quarter. It would also mean that Apple has had its worse Q2 iPhone sales since 2013. 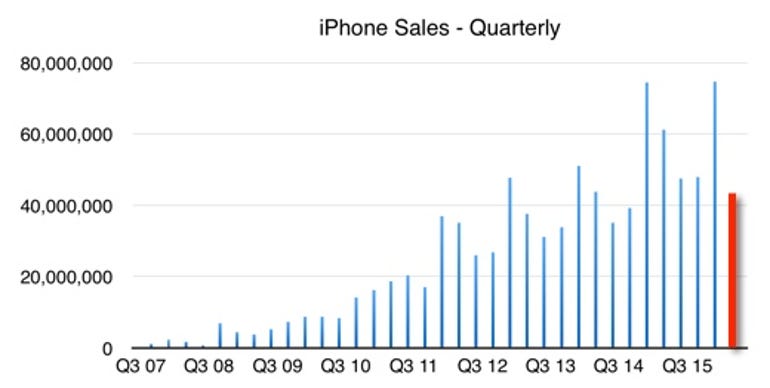 About the only company that is enjoying gains is Samsung, who has seen its market share grow to 27.8 percent from 22.1 percent for the year-ago quarter.