CIO Strategies: Making sure your best staff stick around is about more than just money.
Written by Mark Samuels, Freelance Business Journalist on Feb. 4, 2019 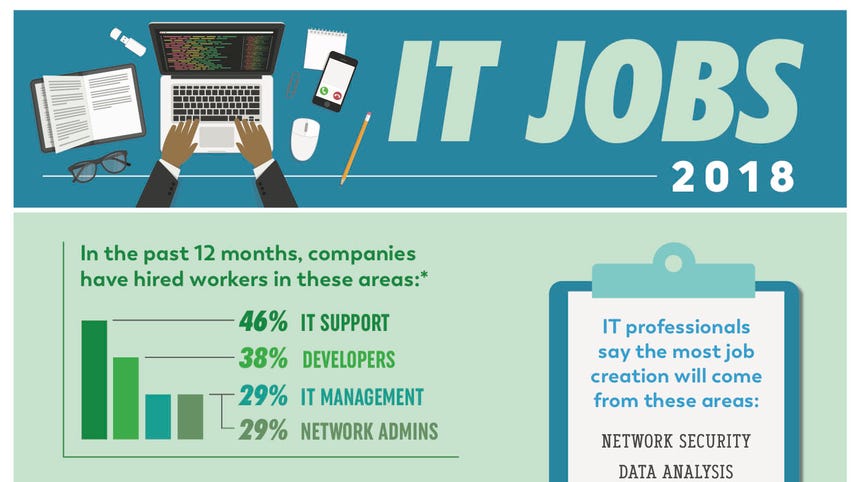 Attracting staff is one thing, keeping them happy is another thing altogether. While career promotions and wage increases can go a long way to ensuring your workers stay motivated, IT professionals will quickly become bored if their roles aren't fulfilling.

With demand for skilled technology workers higher than ever before, businesses must work hard to ensure they retain their top talent. High turnover of staff is expensive, can rob projects of expertise just when they need it, and can hurt morale.

So, how can CIOs keep their workers happy and eager? ZDNet speak to the experts and finds out their best-practice tips for keeping staff motivated.

1. Talk about the benefits of change

Julie Dodd, director of digital transformation and communication at Parkinson's UK, admits she wishes she had the "magic answer" to the question of how to keep people motivated. "It's a challenge — especially for charities, where financial reward isn't going to be the answer," she says.

Dodd says running an organisation that embraces digital — as she is at Parkinson's UK — means having to maintain an IT department that also embraces the idea of continual improvement and positive change. That approach brings with it a high risk of change-fatigue, but Dodd says that challenge is surmountable with the right strategy.

"I think, where we've been successful at bringing our people along with the rapid pace of change in the organisation, it's been through regular communication — particularly about the ultimate benefits for people affected by Parkinson's," says Dodd. "Showing the impact is key, but I'm not sure whether you can do the same if you work in a commercial company, where ultimately the change is about shareholder value."

In the case of her own organisation, Dodd says the internal communication team plays a crucial role. The team have encouraged staff from across the organisation to post blogs and videos about interesting change projects that are taking place at the charity. That process includes regular updates from the CEO and the leadership team, including Dodd.

"Hopefully that means people feel they are, and can be, part of the change, rather than it being something that they feel is simply happening to them," she says. "Our organisational development teams — which includes people from HR, facilities, internal communication and volunteering – have really embraced this challenge and developed an overall modern workforce programme to make sure we're developing the skills we need to be a successful organisation in the digital age."

2. Give a career to your employees, rather than just a job

Alan Talbot, CIO of Air Malta, says he is lucky to have a loyal and dedicated team. Those motivated workers aren't just long-standing hires. Talbot says one of the first things he did after becoming CIO in October 2016 was to reshape the IT department. His organisation managed to attract motivated talent from a range of different industries.

"We got new blood in from outside the airline industry — these people came from oil and gas, telecommunications, auditing, financial services, and gaming," says Talbot. "That approach brings in a lot of new energy and insight to the organisation."

While gaining new hires has not been too challenging, Talbot recognises that keeping people motivated is more of a challenge when it comes to salaries. He says there is a strong demand for IT talent from the gaming industry in Malta, which is a cash-rich sector that can pay higher wages.

"We try and mitigate this by giving more responsibility and job satisfaction to our people," he says. "It's all about empowerment and making sure everyone is part of the project, from inception through to implementation. We try and give a career to our employees, rather than just giving them a job."

3. Get employees to believe in your projects

Amitabh Apte, global director of digital integration at Mars, says staff motivation programmes must begin at the very top of the business. Apte reports to Mars' global chief digital officer Sandeep Dadlani, who was appointed in July 2017 and who quickly identified integration as a key component for digital success.

"I owe a lot to Sundeep and the rest of the management team because they've created this programme where we're actively looking to build capability. This is an exciting time to be leading digital integration at Mars," says Apte, who joined the company in May 2018.

A strategic review in 2017 suggested Mars should create a dedicated integration centre led by an experienced executive. Apte now leads this centre, known as Integration Hub. "I'm in a very unique position," he says, explaining how his long-term aim is to build high-skilled data capability across the business.

Apte recognises, however, that not all digital leaders will be in such a fortunate position. Like so many other IT chiefs, he points to the importance of close alignment between technology and line-of-business professionals. Companies with clear business outcomes will be able to develop projects that keep IT workers interested and motivated.

"The challenge is that in some organisations you don't have such an elaborate programme and you spend too much of your time looking for the next problem to solve," says Apte. "When you create a specially designed programme, it helps keep people focused and they're right behind you. If a project's exciting, then people will buy into it."

Barry Libenson, global CIO at financial data company Experian, says he has managed to establish a strong working culture with a high level of motivation. "Everybody is moving in the same direction," he says.

Libenson points to the need for strong governance to create alignment. But while tightly governed policies are important, Experian also creates a structure to ensure fresh ideas are heard and motivations are protected.

"We now have standard development policies and standard architectural policies, but the decision-making is still fairly democratic — but if the democracy breaks down, we have a better process for ultimately working things out," says Libenson.

"We do have a policy and sort of a way of allowing a mechanism for everybody to provide input. That doesn't mean that we're always going to all agree. But it means that we do have a way that people get to share their thoughts. That's kind of how the development and the technology side of Experian tends to operate."

Telling people what to do isn't the same as persuading them that you are right. Here's how to get them onboard with your vision.

Taking on a new project outside of the day job could have some surprising consequences.

Here are the developer roles that careers service Dice found had high average salaries during 2018.

What is a chief digital officer? Everything you need to know about the CDO explained

Why did the CDO role come about and how will the chief digital officer evolve in the future?

In an interview with Vice News Tonight on HBO, Apple's CEO also denies that storing customer data in China makes it easier for the Chinese government to access the info.

Cloud Storage
How to stream from your iPhone to your TV

iPhone
This battery safety feature can break your Apple AirTags. Here's how to fix it