LAS VEGAS--Lenovo expects to benefit from a growing move by large enterprises toward Choose Your Own Device (CYOD) policies, as they favor vendors with wider product portfolios. 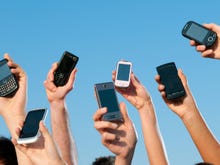 "Choose" rather than "bring" your own device will become the main enterprise mobile strategy, because it enables better security and mobilization of applications, according to IDC's Asia-Pacific Predictions for 2014.

"For people who have traditional [security] concerns, want to deal with a single supplier, and want to deal with one sales person and one contract? That move in the industry actually benefits us very well," said Kevin Beck, Lenovo's senior worldwide competitive analyst for customer centers. He was speaking to reporters on the sidelines of International CES here.

CYOD , where a company lets employees pick their own corporate gadgets from a pre-qualified pool of OSes and devices, allowing IT departments to regain some control and reduce work needed in provisioning for a typically wider range under Bring Your Own Device.

"For the average small business, it's not a productivity loss or big concern to them if they have to reimage one of their 10 PCs every now and then, but for a company which has 100,000 of them, they absolutely want commonality of the image and we have the internal labs to do that," explained Beck.

He added Lenovo's portfolio expansion in recent years into tablets and convertibles has made its proposition even more compelling. At CES, the company further ramped up its product range to include Android desktops .

Lenovo is eyeing further traction as it pushes its smartphone ambitions . The company's handset business is strongest in China, and it hopes to increase its overseas foothold especially in the United States. Key to its plans to capture more marketshare is tapping emerging markets, particularly consumers upgrading from feature phones.

He noted large corporate customers have already indicated interest in adopting its smartphones globally but have been unable to due to the handsets limited rollout in selected countries at the moment. "That's been limiting for leveraging these big accounts that are loyal to us, I think over the next couple of years you will see that change."

Keith Liu, director of launch marketing for Lenovo Business Group, added: "In China, a lot of companies are talking to us and procuring smartphones for enterprise rollout and with software customization. [But] outside of China it's still very much a consumer play."

According to Beck, another factor which will put Lenovo on the shopping list for enterprises is consumerization, where employees push for their preference in brands. In line with those efforts, Lenovo has been undertaking long term branding campaigns to win over younger users, such as in its partnership with Ashton Kutcher as the face of the Chinese company in the United States.

Making Lenovo's products sexier is part of the strategy, particularly for Beck, who has been involved in finetuning the ThinkPad's features. "If you look at our products from three or four years ago, I honestly believe we were a little slow to completely understand what consumerization meant and how much end users identified with their PCs," he said.

One important but subtle change in 2013 was in making the Lenovo logo on laptop covers face rightside up when opened, as a way for users to show off their products.

"We care about what other people think," said Beck. He added the research team also deliberated over the laptops' shock absorbing "feet", after finding out different wear-and-tear patterns between Iceland versus Saudi Arabia due to the different climates. This led Lenovo to redesign the shock absorbers from solid rubber to a more "airfilled" material for better consistency.

Ryan Huang of ZDNet Asia reported from International CES in Las Vegas on the invitation of the Consumer Electronics Association.