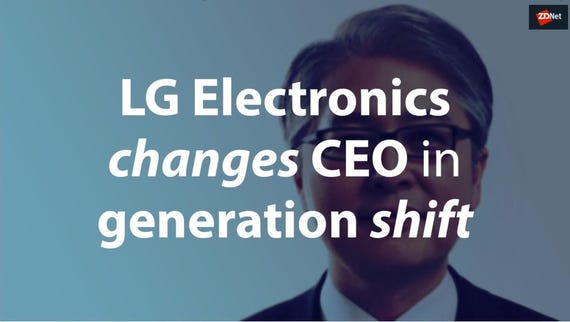 LG Electronics has named a new CEO in its regular year end reshuffle in a bid to increase collaboration among its business units and sister companies, and develop data-centric businesses such as AI and software.

Brian Kwon, who previously headed the company's mobile and TV businesses, will take the helm of the entire operation, LG said.

The appointment of Kwon, who is considered a close aide to LG Group chairman Koo Kwang-mo and vice chairman Kwon Young-soo, marks a generation shift for LG Electronics.

Outgoing LG Electronics CEO and vice chairman Jo Seong-jin, credited with boosting the company's home appliance business, took the helm during the tenure of the previous chairman, Koo Bon-moo, who passed away in May last year.

A new position of chief strategy officer, to be headed by William Cho, has also been created to increase collaboration among its business units and other LG affiliates.

The new leadership team will focus much effort in the years ahead to accelerate LG's digital transformation across all operations to be more data-centric, LG Electronics said in a statement.

The latest reshuffle in LG Electronics is part of an ongoing, group-wide cultural shift commenced by LG chairman Koo Kwang-mo and his management team since he became CEO of LG Corp. in June last year.

If the previous generation's leadership focused on technology and craftsmanship above all, this new generation's management style has been decidedly more American -- quicker critical decision-making, wholesale restructuring of unprofitable operations, and aggressive marketing and lawsuits against rivals.

Koo has also stated that he wants "digital transformation" across all LG affiliates to find new growth in AI and software in their respective business areas.

LG Display changed its CEO in September in an extraordinary board meeting amid losses from its LCD unit and slower than expected growth of its OLED business. Since then, thousands have been laid off and the company is considering reducing its LCD output by near half next year.

LG Chem, the conglomerate's battery making affiliate, has accused rival SK Innovation of technology theft. LG Electronics has filed a patent lawsuit against its Chinese rivals in handset and TVs.

The newly-appointed CEO Kwon of LG Electronics, who is known for his aggressive management style and long tenures in the US, fits this bill perfectly.

The harder part, however, will be combining the company's assets and finding new growth in AI and software, which LG, as mostly a hardware company, is hardly accustomed to. Not to mention its mobile business is still in the red.

LG's V50 ThinQ 5G is a 5G smartphone with a difference: it comes with a hinged cover that incorporates a second screen. If this doesn't appeal, you'll probably want to look elsewhere.

LG needs to decide where OLED should live

LG seems unable to decide whether its OLED TV is a luxury item or a premium consumer electronic device. It's time the company made up its mind.

LG Display is expected to commence a tough restructuring on its money-losing Liquid Crystal Display (LCD) business and hopes to increase the profitability of its OLED display panels under new leadership.