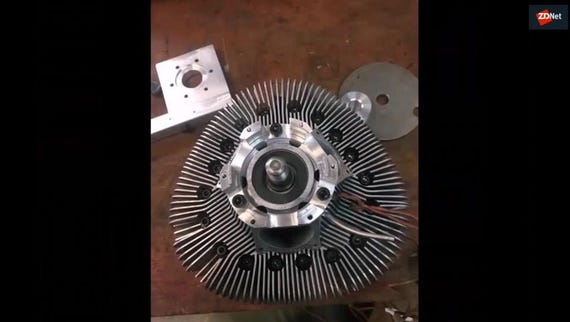 A company that makes an innovative rotary internal combustion engine just received a Phase I research grant from the U.S. Army to develop hybrid-electric propulsion for UAVs. The development underscores the central place the drones will play in modern warfare, as well as the fact that we're going to see a lot of drone innovation in defense.

LiquidPiston, based in Connecticut, recently showcased its proprietary X-Engine in a successful parallel hybrid UAV demonstration using jet fuel. Just as small satellites are requiring a rethink to propulsion systems, the proliferation of UAVs in areas like defense are leading to development of novel new engine designs that drastically increase power efficiencies.

The problem is that today's power plants, whether electric or combustion-based, rely on decades-old technology, and it shows. Gasoline engines are inefficient, diesel engines are big and heavy, and electric power/batteries weigh a bunch compared to what they produce. These features present significant limitations to the range, payload, and efficiency current engines can achieve and increase operating costs. Nowhere are those limitations more apparent than in UAV, which require close attention be paid to the weight/power tradeoff.

"When we reimagined the rotary engine with the X-Engine, we knew it could be used to improve power generation in a number of different ways, given its high power-to-weight, efficiency, and ability to run on heavy fuel including Jet-A / JP8 fuel which the Army wants to use exclusively," says Alec Shkolnik, CEO and co-founder of LiquidPiston.

The company's rotary engines, which can be be made in 1hp up to 1000hp configurations, are up to 10x smaller and lighter than traditional diesel engines and increase efficiency by 30%. Since, like other rotary designs, the engines have only two primary moving parts, a shaft and rotor, size and vibration are kept to a minimum compared to other combustion engine designs. The company emphasizes that its rotary engines are not Wankel engines, which until now has been the only commercialized rotary engine design. Employing a roughly triangular rotor that is spun during a combustion cycle, a Wankel engine forms a seal with the outer case each of the three points of the triangular rotor. As the rotor spins, those seals are subjected to forces that cause them to wear.

LiquidPiston's engine, on the other hand, uses an oval rotor that moves within a triangular housing. The required seals are mounted on the stationary housing and are lubricated directly, increasing wear life and durability.

LiquidPiston's X-Engine also doubles as an efficient auxiliary power unit, which makes it attractive to the Army, where getting power to remote areas is a primary concern.

"Advanced power generation and alternative fuels are critical for the Army," says Dr. William Cohen, Chief Technology Officer of the U.S. Army Assistant Secretary of the Army, "and we continuously seek new technologies that can materially improve our ability to execute national security missions. Reliable engine technologies that offer a wide range of sustainable applications, from UAVs to auxiliary power units for air and land vehicles, can increase endurance and lessen reliance on contested or extended supply lines."

In a UAV application, the weight saved with such an engine might enable vertical takeoff and landing, which vastly increases use cases, as well longer flight times.

Join Discussion for: LiquidPiston earns Army grant for next gen...