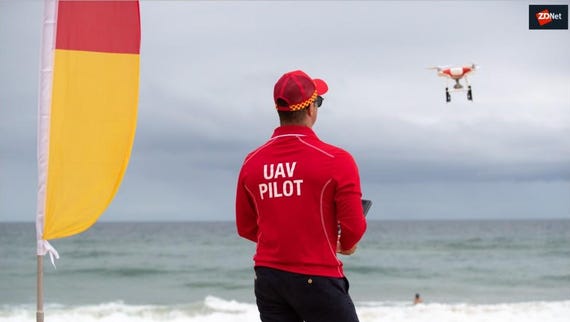 The same artificial intelligence (AI) drone technology that the Little Ripper Group used for its shark detection drones is now being used to spot crocodiles in Queensland.

Little Ripper Group co-founder Paul Scully-Power said the company was approached by the Queensland government to help keep beachgoers safe in the water and on land from crocodiles.

"The Queensland government said, 'Hey do we have a challenge for you and asked can you spot crocodiles for us?' Crocodiles are slinky people that like dark, muddy water, so we took on that challenge," he said.

The launch of the crocodile-spotting drones follows on from a trial that was carried out between Surf Life Saving Queensland and the Little Ripper Group to identify, monitor, and track the movement of crocodiles in November.

The drone technology, dubbed the Little Ripper and designed together with the University of Technology Sydney, uses an AI system that was originally designed to detect sharks in real-time.

See also: How AI and drones are trying to save the Great Barrier Reef (TechRepublic)

Speaking at the Amazon Web Services (AWS) Public Sector Summit in Canberra on Wednesday, Scully-Power said the drone technology can differentiate up to 16 different types of marine life.

The technology also features an in-built siren and speaker system and can also deploy flotation pods during emergency rescues to support up to four people.

In addition, Scully-Power announced that the AWS cloud has been able to reduce latency of its video feeds from its drones from 10 seconds to 1 second, resulting in the launch of The Little Ripper live stream management app to allow life savers to view live video feeds from their smartphones.

Last summer, 51 drones were deployed around Australia to help spot rips and swimmers in distress.

Looking ahead, Little Ripper Group plans to deploy long-range drones to monitor unpatrolled beaches in Australia, with the first ones expected to fly between Sydney and Newcastle.

"Through the cloud we will be able to monitor the stretch of beaches and be reactive if there's an issue," he said.

Scully-Power said such drone technology has the potential to also be applied for a range of other use cases including transport, infrastructure, and even border protection.

"The Ripper Group have been approached by many countries to deploy this cutting-edge technology, such as the USA, China, Japan, India, South Korea, Malaysia and Reunion Island," he said.

In other parts of the country, drone technology is being used by Victoria Police to assist with police operations. A dedicated unit was formed as a result of this.