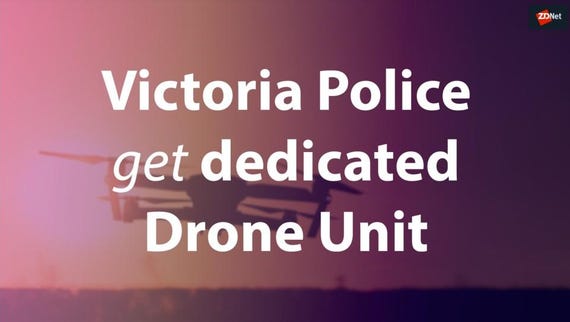 A statement from Victorian Acting Premier and Minister for Police and Emergency Services Lisa Neville said the drones can be used during the day and at night for a range of operations, including forensically documenting crime scenes to capture footage from all angles with millimetre precision.

The unmanned aerial drones will also be used to map crime scenes and provide search and rescue support. Neville said they can also be applied in emergency management situations as a communication tool, or as a provider of first aid, food, and water to people in hard-to-reach areas, such as rooftops, cliff faces, or mineshafts.

See also: Should police need a warrant to collect evidence with drones?

The tech will also aid police in regional Victoria, helping them look for and assess stolen property, drugs, and missing people.

The new unit will have the ability to deploy highly-specialised, metropolitan-based drones, while also managing all Civil Aviation Safety Authority compliance requirements, the state government said.

Victoria Police expects to have at least 50 drones available and up to 70 specialist operators trained across the state over the next year.

The Drone Unit will also be supported by five additional positions in the Air Wing, as part of the state government's push to have an extra 3,135 police officers in Victoria.

These positions will be fast-tracked from the 2020-21 allocation of new police to allow this new capability to commence immediately, Neville's statement said.

"Every second counts during emergency incidents -- these drones can be rapidly deployed and provide police with the speed and flexibility they need."

The Victorian Police Force announced in October it would implement new number plate recognition and in car video technology, thanks to a AU$17.3 million deal with Motorola Solutions.

The tech falls under the Victorian government's Towards Zero initiative, aimed at making roads safer to reach the goal of zero deaths on roads in the state.

As part of Towards Zero, the police force also initiated an opt-in trial using GPS to track stolen vehicles in Melbourne. Participants of the real-time Vehicle Tracking Initiative can have sensor devices installed into their vehicles, which allow them to track their vehicle through an app on their smartphone, as well as receive an alert if their vehicle is moved from a set location.

If the vehicle is stolen, the owner can use the app to alert police, who can then live-track the vehicle before intervening.

Legislation was also introduced into Victorian Parliament in 2017 to ensure police officers are able to legally use body-worn cameras. The state began the rollout of body-worn cameras the following February as part of plans to deliver 11,000 cameras to Victoria Police by 2020.

Minister for Education Dan Tehan said it would be 'wonderful' if other states and territories followed Victoria's announcement to ban mobile phone use during school hours.

The state Budget is also prioritising ambulance radio upgrades, acute healthcare through initiatives such as a digital patient records system, and a handful of tech-related projects in schools.