Logitech has expanded its portfolio of video conferencing endpoints with Rally, a modular system comprising a 4K PTZ (pan-tilt-zoom) camera, a separate speaker, a microphone pod and two hubs -- one for connecting microphones and a laptop or PC, and one for attaching a display and speaker.

A key driver for the new Rally system, Stephane De Lorenzi, director of portfolio strategy and business development at Logitech, told ZDNet, was the greater emphasis on video rather than audio conferencing in large meeting rooms: "The traditional meeting model was an audio call, with everyone around a speakerphone in the centre of the table. With the shift to video calls, people are looking at the screen, with remote participants and shared content, so we want to realign the video and the audio."

The solution is a much more modular system, which will be sold in different configurations.

The new 4K PTZ Rally Camera can zoom up to 15x and delivers better low-light performance than Logitech's previous 10x-zoom PTZ Pro 2, said De Lorenzi. It's a more substantial unit, too, and can be mounted in a variety of ways -- including on a ceiling, in which case the image is automatically flipped. The camera's remote control also now uses RF rather than line-of-sight infrared.

To cater for different meeting room configurations, up to seven microphone pods -- each containing four mics -- can be daisy-chained, with beam-forming allowing speaking participants to be identified and isolated.

Another problem that can arise with speakerphone-based systems, said De Lorenzi, is a tangle of cables connecting the PC, audio and video elements. Rally's solution is a pair of hubs, connected via a single Cat6 cable: the table hub has USB, HDMI-in and LAN (RJ-45), while the display hub has USB, HDMI-out, camera (USB-C) and speaker connections. The speaker -- a substantial bar-shaped unit -- will generally sit below the display, outputting audio from the meeting's common point of focus.

The Rally Camera is available standalone for £1,299 or €1,399 ($ price TBC), while an entry-level Rally system comprising the camera, table and display hubs, one speaker and a microphone pod will be available in the autumn at $1,999 (£ and € prices TBC). A Rally Plus bundle will add a second speaker and mic pod and will cost $2,499, while additional mic pods will cost $349 each.

Logitech RightLight and RightSound are already included in a number of Logitech conference cameras and webcams. RightSight will be available later this year through a software download. 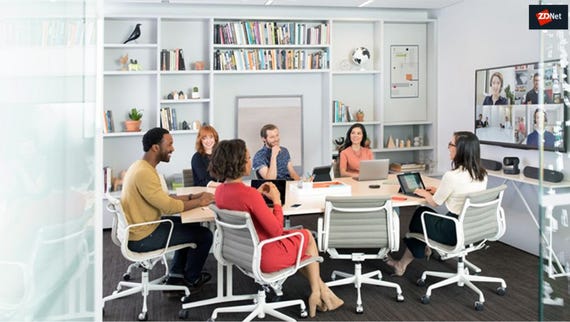