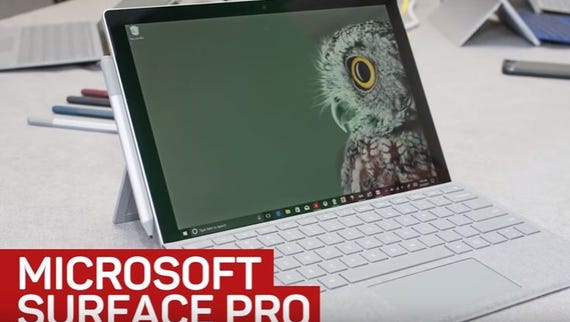 Microsoft's Surface business has always been a minefield for the company.

The OEMs who build PCs that run Microsoft Windows aren't thrilled at the prospect of their partner also being a rival in the cutthroat hardware business. The competitive challenge for Microsoft, then, is to be successful but not too successful.

That might explain why some Surface decisions, especially pricing, are less than aggressive, leaving Microsoft "vulnerable to competition," in the words of ZDNet's Larry Dignan.

Microsoft's Surface Pro has been hit by price competition and a bevy of rivals moving faster with similar designs.

In fact, it's pretty clear that the company has no desire to knock any of those OEM partners out of the top slots on the PC market share charts.

Instead, its goal appears to be very different. The point of Surface is to build devices that define the premium PC market, where the profits are to be found for the entire Windows ecosystem. Microsoft has packed its Surface devices with features that it expects and even encourages its OEM partners to copy. In this case, imitation isn't just the sincerest form of flattery, it's a desired outcome.

Read also: $300 Windows 10 Surface Pro lookalike makes its crowdfunding debut | With one small tweak, the iPad could replace the laptop | Is Windows 10 S for you? The good, the bad, and the target users

The current Surface lineup consists of four device families that neatly define the categories Microsoft wants to encourage those partners to populate with new designs. And, not surprisingly, those categories map very closely to Apple's current product line.

Here's a closer look at where each of the four current Surface models fits in today's PC market.

The newly announced Surface Pro has a familiar name and shape. It loses the model number but retains the dimensions and signature features of its predecessor, the Surface Pro 4. The kickstand, detachable Type Cover, and pen give this device a distinctive look.

Go beyond external appearances, though, and Microsoft promises some impressive improvements for the Surface Pro (2017). A much longer battery life, for starters. No, the claimed 13.5 hours is probably not realistic, but even the ability to work a consistent eight-hour day would be a huge improvement.

The fanless m3 and i5 models will appeal to people who don't need intensive processing power and are annoyed by the occasional fan noise from the Surface Pro 4. A 4G/LTE version is also coming before the end of the year.

Surface Pro is a PC that can do some tablet-like things. It isn't the right choice for someone who wants a conventional laptop (although it fills that role well enough). It's made for people who will use it regularly as a tablet.

In that respect, the Surface Pro is trying to play the same role as Apple's iPad Pro, which is a tablet that can do some PC-like things. For both devices, the pen is an essential peripheral. It's no accident that Microsoft touts the Surface Pro's ability to shape-shift from Laptop mode to Studio mode (like a baby version of the Surface Studio) to Tablet mode.

Which one you choose probably has more to do with your preferred platform than anything else.

One look at Microsoft's first-ever laptop makes it clear this device was designed for buyers who value mobility over raw computing power.

This is not, by the conventional definition, a business PC, although it will certainly appeal to a broad swath of the market for business PCs. Think of it as a MacBook Air alternative for those who prefer Windows, except with better specs, at least on paper. The Surface laptop weighs 0.2 pounds less than the MacBook Air and claims a battery life that's 2.5 hours longer, at similar price points.

Unlike the MacBook Air, it supports biometric sign-in with Windows Hello facial recognition, and it has a full touchscreen. That screen is the same size (13.5 inches, diagonal) as on the Surface Book, albeit with a slightly lower resolution. (After looking at an army of Surface Pro clones, I am delighted to see how many have copied the 3:2 aspect ratio that's standard in Surface devices. I wish more would use that aspect ratio with conventional laptops.)

The Surface Laptop also has a bit of flair, with a selection of colors that includes Cobalt Blue and Burgundy as well as a standard keyboard that's covered in Alcantara fabric.

I had a chance to spend a few minutes with this machine at Microsoft's Build conference in Seattle and was impressed with its build quality. It will be interesting to see how the Surface Laptop performs with Windows 10 S and whether it can live up to Microsoft's claims of faster startup and longer battery life. I suspect most early buyers won't bother to find out but will instead take immediate advantage of the free upgrade to Windows 10 Pro.

In almost every dimension, the Surface Book is bigger than its younger sibling the Surface Laptop, with the balance of features firmly tilted in favor of performance and, not surprisingly, a higher price tag.

For those who prefer Windows over MacOS, this is the obvious MacBook Pro alternative, with the distinctive difference of touch and pen support. Where Apple added a small touch strip (with TouchID support) to some of its latest MacBook Pro models, the Surface Book, like most of the premium Windows ecosystem, has gone all in on touch.

All the i7 Surface Book configurations include a discrete Nvidia GPU (the dGPU is an option on some i5 configurations), making it attractive for graphics professionals or anyone who wants the performance boost that you can't get with onboard graphics.

The keyboard base is solid and a joy to type on. It also contains a hefty battery, with the updated Performance Base incorporating an even bigger battery and an upgraded Nvidia GPU and raising the claimed battery life from 12 to 16 hours.

The Surface Book weighs in at 3.34 pounds (3.68 with the Performance Base); that's more than the 13-inch MacBook Pro, at 3.02 pounds. But those extra ounces might be worth it if you want all-day, all-night performance: Engadget measured the Surface Book's battery life with the Performance Base at more than 16 hours, nearly five hours longer than the 13-inch MacBook Pro.

Microsoft's uneasy competitive relationship with its OEMs has one advantage. Because it's not constrained by the need to compete aggressively on price, it can afford to enter categories that other manufacturers might consider too small or esoteric.

And thus the Surface Studio was born. Fully upright, it's a large all-in-one PC. But push lightly on the Zero Gravity Hinge and it shifts into Studio mode, where an artist can use the pen to sketch, refine, and edit directly on the screen.

There's nothing quite like this on the market, especially for anyone in the Apple ecosystem. Cupertino has the combination of the iPad Pro and Apple Pencil, but that device is much smaller and the platform doesn't offer the full range of creative software you get on a desktop PC or Mac.

I'm not sure how many Surface Studios Microsoft will sell. The market is probably smallish at best, especially with these eye-popping price tags. But the introduction of this device served its purpose, allowing Microsoft to claim the role of innovator in the PC space, and giving the company's PC partners a long list of ideas to incorporate into their more mainstream products.

And that, after all, is the name of the game.