Full Bio
Posted in Between the Lines on November 20, 2017 | Topic: Data Centers 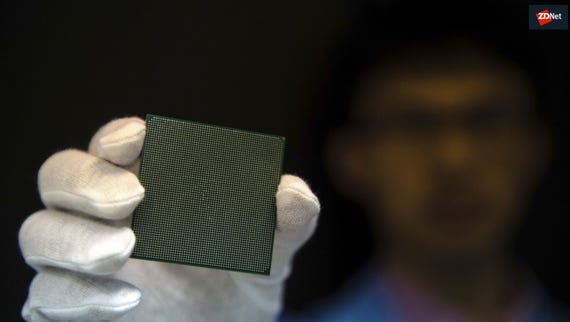 Marvell said it will acquire Cavium in a deal worth $6 billion as the semiconductor industry continues to consolidate.

For Marvell, the Cavium purchase will give the company more revenue diversification and scale to compete with rivals that are bulking up. Intel is the biggest player, but Broadcom, which just closed the purchase of Broadcom, is making an unsolicited bid for Qualcomm, which is trying to close an acquisition of NXP. Qualcomm has rejected the Broadcom overture.

Marvell said it will pay $40 a share in cash for Cavium and 2.1757 in Marvell shares for each Cavium share.

In a presentation, Marvell and Cavium made the case that it will be more equipped to sell to cloud providers and enterprises running their own data centers.

The combined company will have $3.4 billion in annual revenue. Marvell said the plan its to combine its storage controllers, networking and wireless connectivity products and intellectual property with Cavium's multi-core processing, networking, and storage tools. The goal for Marvell is to offer customers a broader product menu.

Marvell CEO Matt Murphy and Cavium CEO Syed Ali said the combined company will have end-to-end products, scale and more research and development heft. The transaction is expected to product $150 million to $175 million in annual savings within 18 months and boost earnings and revenue growth.

According to the companies, Murphy will be CEO of the company and Ali will remain as a strategic advisor and board member. Jean Hu, Marvell CFO, will continue in his role and Cavium's Raghib Hussain will be operating chief. Cavium's Anil Jain will be vice president of IC engineering.

Marvell also said its third quarter revenue will be between $610 million to $620 million with non-GAAP earnings of 32 cents a share to 34 cents a share.

Begone, silicon: New semiconductors touted as the future for our chips

Silicon cannot take our computing power as far as we would like, but researchers believe other materials can.

Samsung hits record quarterly profit on back of semiconductor business

Profit in Samsung's Electronics mobile business was slightly down, while semiconductor profit more than tripled.

Join Discussion for: Marvell buys Cavium for $6B as semiconductor...