If you need a second display and want it to be portable, the SPUD, or Spontaneous Pop-Up Display, could be for you.

The SPUD, which is launching via a Kickstarter campaign, packs a battery-powered projector and screen in a collapsible design that opens like an umbrella. When closed, it's about the size of a book and weighs 2 lbs (900 grams). Pull back the projector, which shoots the image from the rear, and the SPUD's polymer screen opens like an umbrella to serve as a 24-inch display.

Sony released its short throw projector earlier this year, which isn't limited to viewing in dark rooms, but it costs $1,000 and you still need to find a suitable surface to display the image.

The SPUD, which costs $374 under the early bird offer, promises to support wired HDMI connections or it can be connected wirelessly to streaming devices such as Roku and Chromecast. 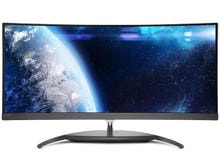 Curved ultrawide displays: Coming to a desktop near you? Do curved ultrawide desktop displays really deliver on the claims of their manufacturers? We investigate the pros and cons.

The brightness dial can be adjusted between 350 and 785 nits to suit soft lighting conditions or a brightly lit office. Disconnected from a power source, it's claimed to last between three to six hours, depending on the brightness of the projection. The image is displayed at 1280 x 720 pixel resolution and SPUD's maker claims its polymer display won't wrinkle after folding.

SPUD's developers, Arovia, estimate it will cost $499 once it's available at retail. The campaign has currently raised just over $190,000, enabling the firm to commit to adding stereo speakers to the device. If funding reaches $250,000, the company promises to boost the battery life from 6 hours to 10 hours.

Arovia has also teamed up with Andromium, which made a version of Android that turns a smartphone into a laptop, to show off how the two can pair to become a mobile desktop system.

The company suggests its pop-up display could be a useful addition to a road warrior's travel kit and ideal for presenting at conferences or trade shows. Alternatively, it could be useful to show movies on camping trips or as a backseat display while driving.

Arovia has also set up its portable display with an Intel Compute Stick, Xbox One, PlayStation 4, and Raspberry Pi.

Join Discussion for: Meet the SPUD: A 24-inch collapsible hi-res...