Moonshot servers, which can be packed into dense clusters for specific computing workloads, got a star billing in Whitman's keynote address at the HP Discover conference in Barcelona on Tuesday. 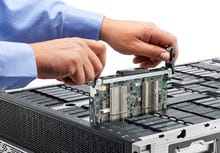 Whitman said technology is undergoing a major shift of the type that occurs only once every 10 to 15 years, driven by the cloud, security, big data and mobility issues as well as in the way technology is being consumed, delivered and paid for.

She said research suggests that by 2016 some 75 percent of the IT environment will be deployed in either a private, managed or public cloud.

"That is going to call for datacentres that expand to fit that scale," Whitman said.

"Thinking about the datacentre alone, everyone in this room knows that the path we are on is not sustainable in terms of space, energy or costs."

Whitman said a conservative estimate is that large cloud and web service providers will require an installed base of eight to 10 million new servers within the next three years. The cost of building these datacentres will be between $10bn and $20bn.

"On any given day, the world posts one billion pieces of content to Facebook, generates 200 million Tweets and creates information using cameras, sensors, GPS-enabled devices and transaction systems - and it all goes to the cloud," she said.

"By the end of the decade datacentre demand will rise to over three percent unless we find a more efficient technology. This is not sustainable. We have to make better use of the electricity that we've got," she said.

She picked out the Moonshot product line as HP's way of addressing these energy, cost and space issues, highlighting the company's role in inventing in the 1980s the servers that power the cloud today.

"Moonshot represents a truly revolutionary innovation. No one else is taking on the datacentre dilemma in the way we are," she said.

Throughout her 25-minute speech, she emphasised the company's history of innovation and the breadth of its products and services.

"We're equally strong in infrastructure, software and services from security to big data. We're uniquely qualified because invention and innovation are heritage values for HP. They are in our DNA - stemming all the way back to our founders Bill Hewlett and Dave Packard," Whitman said.

She said that the company's commitment to investing in R&D is as strong as ever. To emphasise that point, she cited examples of recent innovations in storage, big data analytics, and said the company would soon show how it is overcoming the issues of speed and quality in 3D printing.

Whitman said one issue HP is working is the fundamental architecture of computing, which has changed little in 50 years

"This computing architecture is just inefficient. Ninety percent of the energy used in computing is spent just moving data from a processor to memory to storage and back again. It's slow and it wastes a lot of memory," she said.

"We're going to change the game with two revolutionary technologies created by HP Labs: memristor and photonics, as well as new big data technologies built on the HAVEn platform."

She described memristor as a high-performance, low-cost non-volatile memory with the potential to revolutionise data storage. Photonics uses light and optical fibres instead of electrons in copper wires.

"We use micro-scale lasers on microchips to convert data signals from electrical impulses to light and back again. We've got a solid roadmap to get 6TB a second over photonics interconnects. At that speed you can transfer four days' of HD video in one second," Whitman said.

ZDNet is attending the HP Discover conference as a guest of HP.