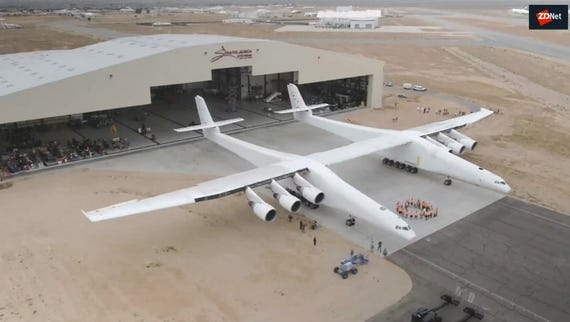 Microsoft co-founder Paul Allen has unveiled his colossal, twin-fuselage jet that will act as an aerial launchpad for low earth orbiting satellites.

The Vulcan Aerospace Stratolaunch carrier made its debut on Wednesday from a giant hangar at the Air and Space Port in Mojave, California, where it's been under construction for the past four years. 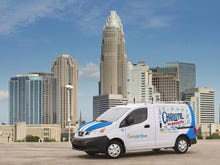 Fiber broadband: Is it a waste with 5G and Elon Musk's satellites on the horizon?

With all the hype surrounding Google Fiber and its competitors, will we look back on the whole experiment as a colossal waste of resources or a long overdue harbinger of better internet?

The twin-fuselage aircraft, which is built from two Boeing 747-400s and by six 747 engines, will now undergo aircraft fueling tests, followed by ground- and flight-testing phases, according to Stratolaunch.

Allen funded the project on the premise that a reusable air-launch system would be cheaper and faster at delivering satellites than traditional earth launches, and in turn would open more opportunities for space exploration and scientific research on earth.

Stratolaunch is envisioned to drag rockets and smaller satellites to about 30,000 feet, at which point the rocket is released and carries the satellite to low-earth orbit. The aircraft would then return to base, refuel and carry more rockets.

With a wingspan of 385 feet (117 meters), which is slightly greater than the length of an NFL field, it is the world's largest aircraft, surpassing Howard Hughes' Spruce Goose H-4 Hercules.

The aircraft measures 238 feet from nose to tail, with a height of 50 feet. Today's hangar rollout is the first time the company has tested whether the aircraft's 28 wheels can support its weight. It can take off with a total weight of 1,300,000lb, and carry maximum payload of up to 550,000lb. It has an flight radius of 1,000 nautical miles.

Under a partnership with aerospace firm Orbital ATK, Stratolaunch plans to launch one Orbital ATK Pegasus XL vehicle and possibly up to three Pegasus vehicles. The Stratolaunch's test launch is scheduled for early 2019.

"This is a first-of-its-kind aircraft, so we're going to be diligent throughout testing and continue to prioritize the safety of our pilots, crew and staff. Stratolaunch is on track to perform its first launch demonstration as early as 2019," said Jean Floyd, CEO of Stratolaunch.

"We have already started preparations for launch-vehicle delivery to our Mojave facilities. We're actively exploring a broad spectrum of launch vehicles that will enable us to provide more flexibility to customers."

Allen co-founded Microsoft with Bill Gates in 1975 and remains a strategy adviser to company, although he resigned from its board in 2000. He has a reported net worth of $18.6bn.