Full Bio
Posted in Between the Lines on March 6, 2013 | Topic: Microsoft

Microsoft is to learn the hard way that "a deal is a deal," at least in the eyes of the European Union, by being forced to swallow a massive fine for breaching earlier promises made with the 27 member state bloc.

The software giant has been fined €561 million ($731m) by European authorities for falling foul of previous antitrust settlement conditions.

The software giant breached a settlement that it signed with the European Commission in 2009, which mandated that it display a "browser choice" screen on all existing and new PCs in the region.

"In 2009, we closed our investigation about a suspected abuse of dominant position by Microsoft due to the tying of Internet Explorer to Windows by accepting commitments offered by the company."

He added: "Legally binding commitments reached in antitrust decisions play a very important role in our enforcement policy because they allow for rapid solutions to competition problems. Of course, such decisions require strict compliance. A failure to comply is a very serious infringement that must be sanctioned accordingly."

A Microsoft spokesperson in Brussels said in an email to ZDNet that the company takes "full responsibility for the technical error." He added:

"We provided the Commission with a complete and candid assessment of the situation, and we have taken steps to strengthen our software development and other processes to help avoid this mistake — or anything similar — in the future."

Microsoft said it will not appeal the fine.

But the "browser choice" screen was left out of new machines running Windows 7 (Service Pack 1) between February 2011 and July 2012. Microsoft said at the time that it had "fallen short in its responsibility" by failing to dish out the choice screen to some 28 million PCs running Windows in Europe.

Today, the European Commission rounded down that figure to 15 million Windows users.

Admitting to its mistake, and adding that it would "comply immediately" with the European authorities, the software giant knew it would face an all but inevitable fine for failing to include the settlement-assured "browser choice" screen.

Almunia said at the time that Microsoft "should expect sanctions,"  and that the commission would treat the case "as a matter of priority."

Microsoft could have been forced to pay up to a maximum of 10 percent of its global annual turnover during its infringing years, notably 2012 , which would total as much as $7.4 billion.

Contributing factors, such as Microsoft's early admission and immediate steps to counter the issue, led to the considerably lower fine of more than 9 percent of that total.

In July, the European Commission said it had received complaints that Microsoft was not carrying out its obligation to provide users with a choice of browser. The EU swiftly opened an investigation into the software giant's alleged oversight. 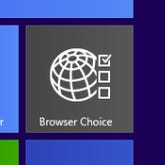 A month ahead of its release, Windows 8 users in Europe are now receiving the 'browser ballot' update in Microsoft's bid to appease European antitrust regulators.

Microsoft came clean in an almost-immediate public statement that it had failed to offer the browser ballot screen since February 2011 because a "technical error" led to the browser choice update not being included in the store-shelf version of Windows 7 (Service Pack 1).

A rare move for any company facing heavy financial penalties from a governmental body, Microsoft said in a statement that it "sincerely apologizes for this mistake."

In "personal talks" with Microsoft chief executive Steve Ballmer, Almunia said that he had "given [him] assurances that [Microsoft] will comply immediately, regardless of the conclusion of the [antitrust] probe."

Following this, even before the release of the next-generation operating system's launch, Windows 8 had a pre-release update added to include the "browser choice" screen, ready for when buyers installed the software on new or existing PCs.

Executives at the company also saw their overall pay dinged as a result of the debacle.

When Microsoft released its fiscal 2012 report , it showed that as a result of the "browser choice" failing within the company's Windows engineering team, former Windows president Steven Sinofsky — who has since left the company  — saw his incentive pay for the year cut.

In 2009, Microsoft avoided a similar up-to-10-percent fine after the firm settled with European authorities. The software maker was accused of unfairly using its operating system monopoly to increase its browser share by bundling Internet Explorer with Windows. 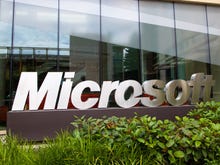 Despite labeling the incident as a "technical error," Microsoft is braced for another hefty fine from the EU after it failed to include the browser choice software in Windows.

In avoiding the fine, Microsoft agreed to change its business practices by giving its European users a choice of browser. In doing so, it allowed users the option of using various browsers from rival companies, including its own Internet Explorer.

The browser ballot was to remain in place until 2014, and be incorporated in next-generation versions of Windows, including the six-months-old Windows 8 .

Today's fine adds to a long list of fines previously dished out by Europe in the last five years over a series of similar events.

In 2008, the company was fined €899 million ($1.44bn) in penalties for failing to comply with a March 2004 antitrust decision, which originally forced Microsoft to create a Windows XP "N" version for European citizens that removed Windows Media Player from the desktop software to allow for competition.

This alone was the largest fine in EU competition policy history until 2009, when Intel took an even larger fine in a separate antitrust suit.

Eventually, this figure was lowered by the European General Court to €860 million ($1.06bn) after Microsoft appealed the case. However, even with this, Microsoft has now racked up a total of around €2.16 billion ($2.81bn) in total over the past decade.

After the news broke that the EU would investigate the software giant, rival browser maker Mozilla said that Microsoft's failure to include a "browser choice" may have lost Mozilla as many as 9 million downloads in total .

According to Mozilla vice-president of business affairs and general counsel Harvey Anderson, "After accounting for the aggregate impact on all the browser vendors, it seems like this technical glitch decreased downloads and diminished the effectiveness of the remedy ordered in the 2009 commitments."

During the period of time in which the "browser choice" screen was not included in the latest version of Windows 7 (Service Pack 1), rival browser maker Mozilla saw a significant and prolonged dip in downloads.

During the 2009 settlement with the European Commission, Mozilla's Firefox browser was one of the top browsers on the market, but it still had a significantly lower market share than Internet Explorer as a result of Microsoft bundling the browser with Windows.

And for Mozilla, a non-profit foundation that generates a good proportion of its revenue from bundling Google search services with its browser, continued development is supported by financing revenue-generating deals with partners.

The EU said today that until November 2010, 84 million browsers were downloaded through the "browser choice" screen, stressing its importance.

Mozilla generates around $300 million per year from Google to keep its web search on the Firefox starting screen and as the browser's default search engine.