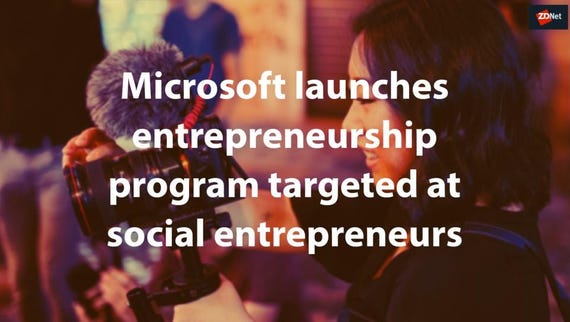 Under the program, which will be available in 140 countries, qualifying social enterprises will receive access to free Microsoft cloud technologies, including up to $120,000 in Azure credits, along with technical support and guidance from a dedicated program manager on how to market, sell, and connect with potential customers such as large commercial and non-governmental organisations.

According to Microsoft, the criteria to qualify for the program include a business metric that measures the impact on an important social or environmental challenge; having an established product or service that will benefit from access to enterprise customers; and a commitment to the ethical and responsible use of artificial intelligence (AI).

Participants focused on sustainability, accessibility, and skills and employability will also be eligible for grants, Microsoft said.

"Our global initiative is designed to help social enterprise startups build and scale their companies to do good globally … and will actively seek to support underrepresented founders with diverse perspectives and backgrounds," Microsoft global sales, marketing, and operations executive vice president and president Jean-Philippe Courtois said in a blog post.

Microsoft will work with partners such as MIT Solve, a hybrid business incubator and marketplace based at the Massachusetts Institute of Technology, to identify social entrepreneurs that could potentially participate in the program using its network that spans across 36 countries.

"With its global reach and reputation, Solve will ensure that we recruit talented social entrepreneurs who might otherwise be overlooked," Courtois said.

Startups such as OmniVis, Seabin, and Zindi have been named as initial participants of the program.

OmniVis has developed smartphone-based cholera detection system, which is currently being tested in field studies locations such as Bangladesh. Meanwhile, Seabin's trash-skimming devices have collected more than half a million tonne of marine litter, and Zindi's web platform has been created to host machine learning and AI competitions online in Africa.

A Deloitte report earlier this year revealed how globally 48% of business leaders believe climate change will have a negative impact on their business operations.

This was a noticeable difference from a similar survey conducted two years ago when it was only 10% globally believed their companies could influence environmental sustainability to a significant degree.

The Internet of Wild Things: Technology and the battle against biodiversity loss and climate change

Karen Roby interviews Charles McLellan about his cover story on how IoT, satellites, smartphones, and other tech is used to combat biodiversity loss and climate change.

The Internet of Wild Things: Technology and the battle against biodiversity loss and climate change

The potential to install a regime of benign surveillance over the natural world is immense, ranging from earth-observation satellites to smartphones listening out for chain saws in the forest.

Luminaries of AI such as Yoshua Bengio gathered in Vancouver last month to champion ways machine learning can mitigate global warming. Despite energy, enthusiasm, and brilliant ideas, the work may still need lots of regulation to make sure greenhouse gas emissions are reduced.

How AI could save the environment (TechRepublic)

Artificial intelligence techniques are now used to monitor endangered species, track diseases, and optimize crops. But there's much more work to be done