Full Bio
Posted in All About Microsoft on October 8, 2014 | Topic: Cloud

At Microsoft's Worldwide Partner Conference in July, Microsoft execs told partners to expect Microsoft to step up its Dynamics CRM Online push. On October 8, the company took a step forward in that direction. 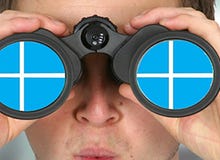 What the enterprise needs to hear from Microsoft When Microsoft execs take the stage later today to talk about what the next version of Windows will do for the enterprise, they'll be trying to restore confidence in something that's looking more and more like a legacy OS. Here's what they should be talking about.

Microsoft is making available starting today a new Sales Productivity bundle that combines Dynamics CRM Online Professional with Office 365 Plan E3 and Power BI, the company's business analytics service. The $65 per user per month promotional price for that new bundle will be available through June 2015. The non-promotional price of the bundle is $105 per user per month.

The new Sales Productivity bundle will be available in all markets worldwide where Microsoft Dynamics CRM Online, Office 365 and Power BI are available, according to company officials.