Later today, at a private press event, Microsoft plans to officially unveil the latest version of Windows, highlighting features and capabilities of interest to the enterprise customers that deliver the bulk of the company’s profit every year.

I expect today’s event will be mostly a recitation of the company's road map, with minor tweaks aimed at pacifying an increasingly restless base.

But in my dreams, I wish that the Microsoft executives in charge of a highly orchestrated event like this one would go off script and say a few things that really need to be said.

The pressure to deliver new features and capabilities at Internet speed is taking its toll on every important platform. After a summer in which Microsoft was forced to pull several updates, Apple botched its first iOS 8 update badly. And now every *nix-based OS is trying to figure out what to do with the Shellshock vulnerability.

Traditionally, enterprise customers will go to extraordinary lengths to avoid updates, which is why XP managed to live so many years past its sell-by date. The latest round of update problems is sure to give that contingent more ammunition.

The solution? Find a way to keep the majority of customers moving ahead at the new rapid cadence while not frightening off the conservative business buyers who pay most of the bills.

Microsoft has a lot of experience with supporting multiple versions of its software. The trick now is to move that user base from four or five versions of each product to two or, at the very most, three.

It’s not an unusual challenge. Many open-source projects have already proven that they can have a stable release channel that lags behind the bleeding edge. Both Firefox and Chrome have done exactly that. Ubuntu has mastered the concept of the Long Term Support version.

Can Redmond really convince corporate customers to upgrade every two years instead of every 10 years? Can they afford not to?

Microsoft’s challenge in mobile devices is to be like Apple.

No, not the modern Apple, which sells tens of millions of iPhones and iPads per quarter. I’m talking about the other, older Apple, which has managed to succeed at its mission despite having an installed base of under 100 million Macs, or roughly 6 percent of all PCs in use.

With steadily increasing Mac sales over the past decade, Apple has proven that it’s possible to survive and even thrive with a single-digit market share.

Apple carved out that niche by catering to small but influential groups of customers. Microsoft needs to play that same game: targeting its core of enterprise customers with mobile devices that are a perfect fit for that market. Dabble in the consumer market if you must, but get serious about building next-generation devices for that group.

The Surface Pro 3 is, after several false starts, the anchor for that product lineup. But it’s only a start.

"You don't have to worry about Internet Explorer anymore."

It’s hard to imagine today that there once was a time, long ago, when Internet Explorer was the most advanced browser.

But after years of neglect, IE lost its edge, and it was overtaken, at least among the cognoscenti, by Mozilla’s Firefox and then by Google’s Chrome.

The most recent releases of Internet Explorer are solid, competent, and even innovative. But they suffer from compatibility headaches made up of equal parts benign neglect and hostility from web developers. The modern web isn’t built for or tested on Internet Explorer.

I have no idea what the answer is. Maybe a future Windows release could give customers a choice of third-party rendering engines (Chromium’s Blink, Firefox’s Gecko) into the default Windows browser, thereby swatting compatibility problems with a single blow.

But it’s clear that Internet Explorer isn’t good enough to be considered the primary browser today except in legacy installations.

"We've made it easy for you to adapt your enterprise apps."

The average enterprise today runs on hundreds or even thousands of apps, most of them written for Windows. 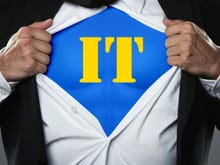 Or, to be more accurate, written for the Windows desktop APIs.

Those apps are slowly but surely being phased out, with their replacements running in a web browser or in a modern, sandboxed OS running on a touch-enabled device.

How many of those devices will be running Windows 8 or 9 or a successor version? A fraction, at best.

Windows built its reputation thanks to the work of an army of developers. Today, those developers are writing for anything but Windows. And that’s a problem.

"Your workers aren't going to groan when they see the Windows logo."

A lot of the speculation over today’s event is over the name of the next version of Windows.

But that guessing game hides the real problem with Windows—its brand reputation.

Among IT pros in enterprise jobs, Windows still has a measure of respect. But among consumers, the Windows brand name is sullied. Increasingly, those consumers are making the decisions about which devices they will use to access corporate services. In a BYOD working world, the devices they are bringing are not typically running Windows.

Putting the Start menu back for the next version of Windows and making it more like Windows 7 just reinforces the idea that this is a legacy OS, with an unclear future. And that’s not the message that enterprises need to hear.

Join Discussion for: What the enterprise needs to hear from Microsoft