Microsoft's Surface tablet is an important element in its plan to reinvent itself as a devices and services company — but while Microsoft has been steadily rolling out its Surface tablet and related offerings , has the pace been fast enough?

It's been nearly a year since the first Surface tablet went on sale, but rather than a big bang, it seems Microsoft has gently introduced its new hardware to the world by adding new markets on a piecemeal basis , and moving away from its initial direct sales model, where everything was inhouse, to one where the occasional reseller is also given the chance to sell a few units.

Right now, for example, Surface is only available from Microsoft direct, John Lewis, Currys or PC World in the UK. Resellers (through which a most enterprises will buy) are still waiting the go ahead to sell it.

Microsoft told ZDNet that is is taking a "measured and phased approach to the growth of the Surface business in order to meet customer demand and partner expectations".

"Surface is now available in 29 markets and more than 10,000 retail locations. Given growing demand, we've also broadened the availability of Surface to our business and institutional customers through a channel-expansion programme that allows commercial customers to purchase Surface devices from authorised resellers in the US," it said, adding that is will be expanding the programme to additional markets in the months ahead.

Some might read this steady rollout as a sign of confidence — that Microsoft considers its 'laptop in tablet form' as such a winner that a bit of a delay in getting into new markets and the usual reseller channels won't matter, and as a recognition that the enterprise buying cycle for new technologies make glaciers look over-eager, so a rush to market is hardly necessary.

That would, of course, be dangerous misreading of how technology is bought by businesses in the era of consumerisation and bring your own device (BYOD).

More likely the Microsoft's hope was for the Surface RT (released last October) to be such a smash hit that it would ignite consumer interest and that the joyous momentum would carry the Surface Pro (released this February) into business, just as consumers who had fallen in love with the iPad made it a corporate must-have too.

That's because consumer tastes now play a huge part in device buying for businesses: no CIO would want to buy some hardware that's so horrendously unhip that their staff won't want to be seen using it.

To sell to the CIO you need to sell to consumers first, which is why the Surface RT made its debut before the Surface Pro.

Unfortunately, the Surface RT in its first iteration hasn't exactly had the kids queueing out of the door. Hence the price cuts and the $900m writedown that may signal millions of devices sitting unsold.

And if the Surface RT didn't deliver the barnstorming opening that the device needed, what's worse is it's created confusion among business users because the stripped down Windows RT operating system won't run standard Windows 8 apps.

As analyst Gartner has previously warned: "Consumer problems are likely to flow into the enterprise as users ascribe negative feelings they have about Windows RT to the organisation's Windows 8 projects. These notions could create resistance to Windows 8 deployments or initiatives to simplify the infrastructure by converting iPad users to Windows 8."

So while the idea of building momentum and attracting enterprise customers may have made sense as a strategy, in execution it hasn't been anywhere near as easy. So does that mean it's time for a rethink of the 'steady-as-she-goes' strategy?

Updates to Surface RT and Pro are in the works (probably a move to Qualcomm's Snapdragon 800 processor for the former and an upgrade to Haswell for the latter) and it's unlikely that Microsoft will give up on Surface , because it absolutely needs a way to stop customers discarding Windows when they dump their desktops and laptops for tablets — a trend that continues to gather pace.

It's also possible that Microsoft may have hoped that by now Surface would be able to pass the baton to another hero device — that Windows hardware makers would have been stung into action and would have come up with something better.

After all, it's these OEMs that are the apparent experts at hardware, not Microsoft. But this hasn't happened — perhaps a reflection of how deep the Windows malaise goes: with the combined might of their R&D and a few years to think about the world's PC makers still can't outdo Apple's iPad launched back in 2010, or even overtake the flawed Surface. Still, no doubt part of the reason Microsoft has been cautious with Surface is so as not to alienate OEMs delivering other types of Windows 8 devices.

But right now for businesses, perhaps unexpectedly, Surface is the most likely Windows tablet option. But how long will those businesses wait for Microsoft to get the ecosystem built? Microsoft wouldn't go into detail about enterprise deployments (although its website lists a few) but said instead: "Our goal is to help as many customers as possible experience all the benefits Surface has to offer."

But TechRepublic has asked its CIO Jury for its thoughts about Surface. While some have deployed it — and love it — others fail to see a role for it. It seems that the confusion around the difference between Surface RT and Surface Pro (pretty much identical to look at, but very different guts) has put some off, while others have found the price too high. 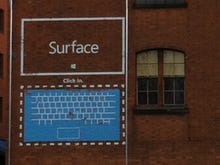 While some CIOs see the potential — "I don't see the iPad as a business tool in most cases. It's a blown-up phone. The Surface is a computer. There is a real difference," said one — others are less impressed.

"The reason is that the Surface is already so far behind in the battle for the hearts and minds that the technical merits are virtually irrelevant at this point. The iPad and, to a secondary degree, Android devices already occupy the branding position and are in the mental forefront of nearly every enterprise employee," said another.

Microsoft ought to be able to find ready customers for Surface in the form of the average CIO – they don't want the fuss and hassle of supporting anything other than Windows, and don't really trust bring your own device because of the hidden costs and security risks.

CIOs want to be able to offer an easy alternative to the iPad and Android tablets, but their early enthusiasm could be wane if they don't continue to see Surface moving forward. Microsoft needs to move as fast as it can to make Surface as ubiquitous as possible.

Join Discussion for: Microsoft Surface: It's time to speed up...