Microsoft's Surface Pro 3 is a tablet that Microsoft is positioning as a laptop replacement . Microsoft officials are calling it a tablet, but claiming it can best laptops, including MacBook Airs, for many, if not all users.

Yet after a month with the Surface Pro 3, I'd argue that it might not be the laptop of your dreams if you are in the market for a high-end ultrabook-class Windows 8 machine.

This is my "review" of Microsoft's Core i5-based Surface Pro 3, which Microsoft loaned me on May 20, as well as of my Acer Aspire S7 ultrabook. I put the word review in quotes because firstly, I am not really a product reviewer, especially in comparison to some of my tech-journalism and blogger colleagues. And, secondly, this post is more about positioning — in the many senses of that word — than about speeds and feeds, which is what many expect when they see the word "review." (If you're looking for the ultimate speeds/feeds review, I'd suggest starting with this one from AnandTech.)

Microsoft officials have contended for the past few years that tablets are PCs. I've never believed that statement. And after using the Surface Pro 3 I feel even more queasy about this claim. 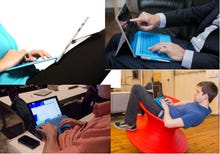 The Ultimate Surface Pro 3 Reviews Roundup In the month since its launch, these 12 reviewers from top tech sites reviewed the Surface Pro 3. One called it "the best everything device ever made." Another called it "the greatest laptop-tablet hybrid you don't need." Here's your executive summary of an amazingly wide range of opinions.

For some users, the 12-inch Surface Pro 3 can and will be an adequate, if not optimal, laptop replacement. It is light, comes with a high-resolution touch display and includes a digitizing pen for free. For those for whom OneNote and/or note-taking are a key part of their workflow, the Surface Pro 3 is definitely worth checking out.

After a month of hands-on time with the Surface Pro 3, I can genuinely and happily say I am not sorry I shelled out $1,500+ for my 13-inch, Core i7-based Acer Aspire S7 ultrabook just a couple of months ahead of the Surface Pro 3 launch.  Finding/buying it was an arduous process , but in the end, worth it.

For the way I work, the Acer is the better device. Granted, I might have been singing a different tune if Microsoft launched what I've been calling a "Surface Book" — an ultrabook-class, clamshell-type laptop. But that isn't what the Surface Pro 3 is.

Why reinvent the wheel — or a form factor that works?

With the Surface Pro 3, I can't help but feel that Microsoft is trying to reinvent a form factor that doesn't need reinventing.

There is a group of people for whom laptops and ultrabooks are the best device, or at least their device of choice. There's a reason laptops — and Chromebooks, by the way — are the go-to devices for their constituencies. They have solid, permanently attached keyboards and protective clamshell covers that doesn't cost $130 extra. They might not be selling as quickly as tablets. But they are tried and true.

Over the past month, I sat the Surface Pro 3 and my Acer S7 side-by-side on a table in my apartment, allowing me to grab and go either device when needed. Both run Windows 8.1 Update. Both have the same apps installed. Both, because they are Intel-based, allow me to run "legacy" Win32 apps, such as Google's Chrome browser, Snagit (an image capture tool) and an app enabling me to connect my Verizon EVDO networking card.

The vast majority of time, I found myself opting for the Acer device, even though it's about a pound heavier than the Surface Pro 3.

The keyboard on my Acer is better, in terms of comfort and feel, in spite of the improvements Microsoft has made to the stability and ergonomics with the new Surface Pro 3. On the Acer, the keyboard doesn't partially obscure access to the icons for the applications I have pinned to my Desktop, which happens with the Surface Pro 3 (as my ZDNet colleague Ed Bott also noticed .) There are more built-in USB ports on the Acer (two vs. one on the Surface Pro 3). The Acer just feels more rugged and ready, overall, to me.

The biggest minus on my Acer S7 so far has been the screen. The screen resolution is fantastic (2560 X 1440), but the display seems susceptible to pitting, resulting from whatever pebbles/couscous crumbs (?) were on my keyboard when I closed the cover. The small pits I've seen aren't affecting image quality but they are noticeable enough to be annoying and worrisome.

And then there's the hot-button issue of "lappability."

I appreciate that not everyone needs to type for hours in cramped conditions on their laptops, like many of us journalists and bloggers do. But I'd argue that many PC users type in/on their laps more than they might realize. Students in classrooms; information workers in impromptu meetings; e-mail respondents on planes, trains and automobiles: We are lap typists. And unless you are willing to creatively modify your Surface Pro 3 (or unless you have really long thighs), the Surface Pro 3, even with its much-improved kickstand, is still nowhere near as lappable as a regular laptop.

I realize all "reviews" are colored by the reviewers' workflow, habits and openness to new technologies. I also know journalists/bloggers represent a tiny fraction of the potential audience for a device like the Surface Pro 3. For me, a traditional ultrabook like the Acer S7 has the combination of power, comfort, lappability and good looks for which I was willing to pay a premium price. Your mileage may vary.

Surface Pro 3 officially goes on sale on June 20 at Microsoft Stores and Best Buys. The i3 and i7 models are due out in late August and can be preordered now.