Full Bio
Posted in All About Microsoft on January 19, 2016 | Topic: Microsoft

Microsoft is readying to replace power cords for its older-model Surface Pro tablets due to overheating concerns.

"As a result of damage caused by AC power cords being wound too tightly, twisted or pinched over an extended period of time, a very small proportion of Surface Pro customers have reported issues with their AC power cord. We will be releasing details of how customers can obtain a free replacement cable shortly," a Microsoft spokesperson confirmed to me today via e-mail.

The recall is said to be for cords that are sharply or repeatedly bent or wrapped, according to Channelnomics Europe.The voluntary recall is not expected to target the Surface Pro 4, which Microsoft launched in the fall of 2015, or its non-Pro Surface models.

In the U.S., Microsoft will be providing the free power cord exchanges for Surface Pro, Pro 2 and Pro 3 models sold before March 2015, the spokesperson clarified. 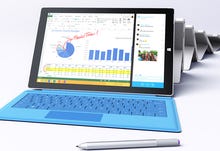 This will be a worldwide voluntary recall. The site with more information about the specifics of the recall should be available sometime "shortly," the spokesperson said.

Update (January 21): Here's Microsoft's information page on how to get power cord replacements.

Join Discussion for: Microsoft to recall some Surface Pro power...