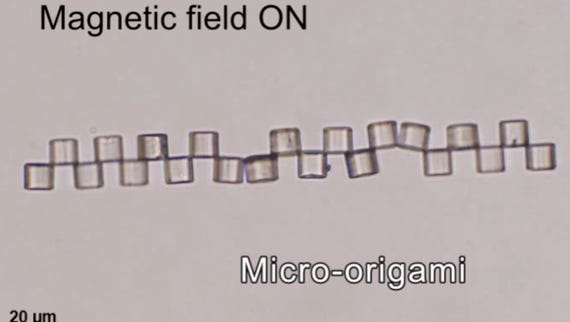 These microbots can capture and transport single cells
Watch Now

Imagine a doctor who performs surgery so precisely that she removes individual cancerous cells one at a time. Miniature robots could make this kind of accuracy possible. We've heard about tiny robots for medical use in the past, but the technology is still rudimentary.

Now, researchers at North Carolina State University and Duke University have demonstrated that they can program tiny machines to capture and transport single cells.

The miniature robots (a.k.a. nanobots or microbots) are made from microscopic polymer cubes that are metallic on one side, so they can be controlled with a magnetic field. The researchers designed the cubes in specific folding patterns, much like origami. Applying a magnetic field forces the robots to open or close.

In a paper published today in Science Advances, the researchers describe how they controlled the opening and closing motions of a Pac-Man-like robot that captured a yeast cell and dragged it away.

Orlin D. Velev, one of the NC State researchers involved in the project, tells ZDNet, "We plan to make such processes scientifically useful by using such microbot assemblies as tools for characterizing the resistance of various cells and lipid vesicles (drug delivery structures) to microscale pinching and pressing."

This work builds on previous research, such as an ingestible origami robot that an MIT team demonstrated last year. Earlier microbots couldn't actually do many tasks, because they could only push objects. The new version from NC State can perform a wider variety of functions because it can be reconfigured on demand.

"There are various other early prototypes of microdevices for medical applications," Velev explains. "However, the new element in our microassemblies is that we can inject externally energy through the magnetic field, which they use to re-shape locally. So the new element is the ability to use local magnetic interactions as means of powering the microbots, instead of just pulling them around by the external field."

When the 2016 Nobel Prize in chemistry was awarded to the people who built the world's smallest machine, the Royal Swedish Academy of Sciences said the nanoscale motor was at the same developmental stage that the electric motor was in the 1830s, when scientists demonstrated prototypes without knowing how they would be used in the future. The possibilities for miniature robots are just starting to unfold.