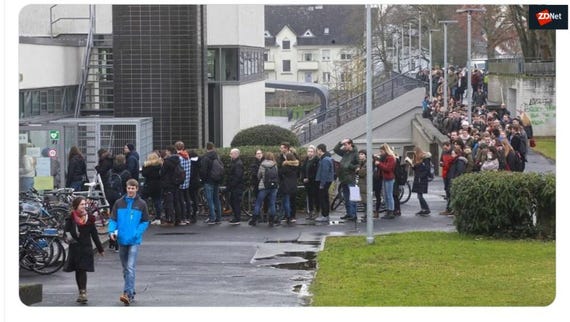 A non-standard and somewhat weird password reset operation is currently underway at a German university, where more than 38,000 students and staff were asked this week to stand in line with their ID card and a piece of paper to receive new passwords for their email accounts.

All of this is going on at the Justus Liebig University (JLU) in Gießen, a town north of Frankfurt, Germany.

The university suffered a malware infection last week. While the name or the nature of the malware strain was not disclosed, the university's IT staff considered the infection severe enough to take down its entire IT and server infrastructure.

The university's network has been down since December 8, and all computers have been isolated and disconnected from each other.

For the past days, IT staff have used antivirus scanners loaded on more than 1,200 USB flash drives to scan each JLU computer for malware.

JLU staff went through this process not once, but twice. They scanned each computer last week and then scanned each system again over the weekend.

Staff said they went through the second scan after the antivirus scanner received an update that was certain to detect the malware that infected its network.

Computers that were scanned and found to be clean received a green sticker, signifying the system was safe to reconnect to the university's network.

Furthermore, JLU staff also believed the malware infection impacted the university's email server, and, as a precautionary measure, they reset all passwords for all email accounts, used by students and staff alike.

But in a bizarre twist of German law, the university couldn't send out the new passwords to the students' personal email accounts.

Instead, citing legal requirements imposed by the German National Research and Education Network (DFN), JLU professors and students had to pick up their passwords from the university's IT staff in person, after providing proof of their identity using an ID card.

JLU's massive security incident, along with the quirky legal requirement, have created one of the bizarre images of 2019 -- with thousands of people standing in line to pick up a new password.

Fortunately, all this happened at a German university, and everything is being done in an orderly and organized manner using a schedule based on students' and staff's birth month.