NAB puts skills training at the forefront of its digital transformation

The red and black bank is putting its people first, a change from the old culture that used to exist.
Written by Aimee Chanthadavong on Oct. 31, 2019 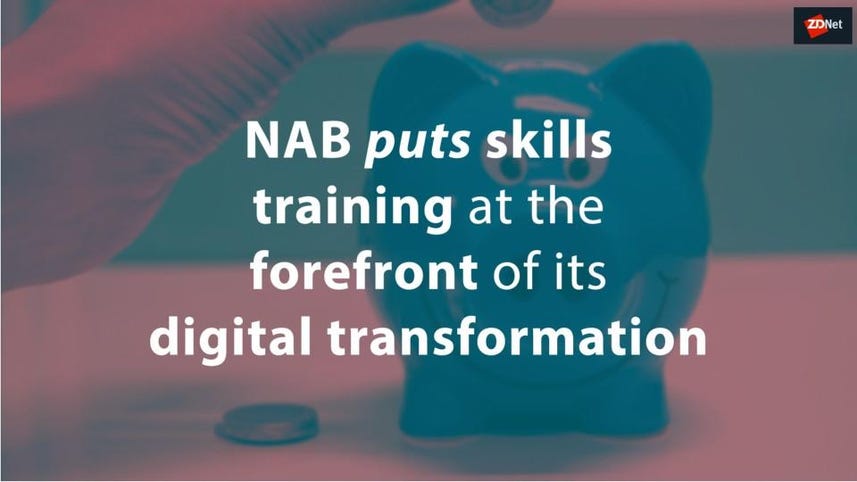 "Transformation at the end of the day has to have people at the core. You can't transform digitally and hope that mindset the people, the DNA stays the same. You've got to transform the people first, as well as the tank," he said.

Since launching its Cloud Guild last April, its in-house training initiative, NAB has claimed that more than 4,500 employees have been trained in cloud technology and close to 900 people have been certified in Amazon Web Services, Microsoft Azure, and Google Cloud products.

However, doubling down on employees' skills was not always a priority at NAB, Patel admitted at CeBIT Australia this week.

"When I joined now one of the things that was happening was people were leaving in droves," he said.

"And one of the things that we found out was that they were leaving because the whole learning model was wrong. They didn't get the right training and the managers weren't  supporting them so what we did was we flipped it over. We said right since the training is problem, we're just going to give you all the learning."

Since making the decision to change the way the company approached training, Patel said NAB has introduced hackathons, meetups, and there are now close to 65,000 learning solutions available to employees covering topics from photography to coding.

"What we've had to do is actually reset the whole model of transformation, the whole thinking around learning and training at NAB. So, the old learning culture that we had shifted dramatically at NAB," Patel said.

"We now have a few things going for us in the sense that we have executive sponsorship. We actually ended up educating our board, our regulators, and our senior leaders on the work that we're doing in transformation."

A key part of the training strategy has also been focusing on staff retention, Patel said. "One of the things that we don't want to do is train people up and watch them leave now," he said.

"What we want to do is give them the opportunity to move up the organisation and when you reach the end of a particular career ladder you gain the title of a distinguished engineer or distinguished data scientist," he said.

"What we want to do is actually make sure that people have a growth plan or growth trajectory at NAB, but also the market branding terms of being a certified AWS cloud engineer and you're also a distinguished engineer."

In July, the bank also expanded its in-house education offering to include a Data Guild and Analytics Guild.

Specifically, the Data Guild focuses on educating the bank's workforce on the importance of good data governance, data quality, and ethics.

Meanwhile the Analytics Guild focuses on upskilling employees on technical skills and capabilities of analytics tools available through cloud providers such as AWS, Microsoft Azure, and Google.

Collaboration
Digital transformation in 2022 and beyond: These are the key trends