Welcome to the fourth of seven NAS stress tests, where we brutalize NAS devices to failure and then attempt to see if they can be recovered. This week, we dig into the Western Digital MyCloud PR4100. Overall, it's the fastest box we've tried, but it failed an important test.
Written by David Gewirtz, Senior Contributing Editor on Aug. 30, 2017 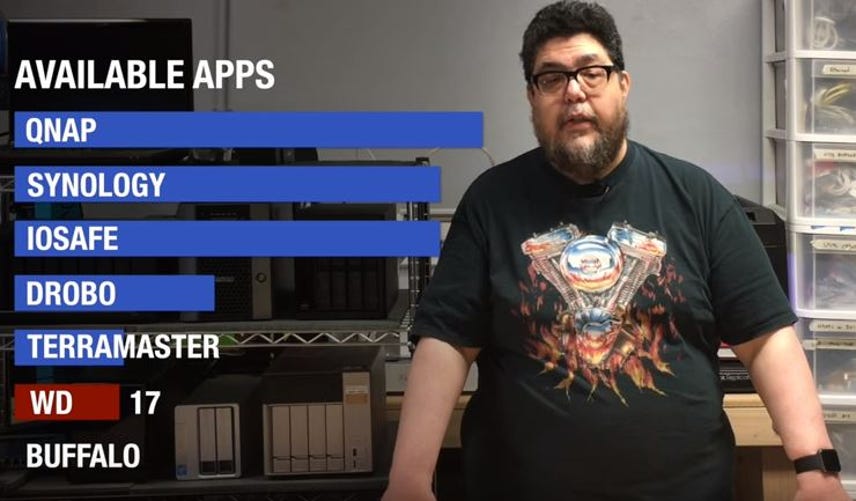 For the past few weeks, I've been stress testing RAID devices for your entertainment and edification. Today, we'll be looking at the fourth of seven NAS products to see how it performs.

I've subjected each candidate machine to a series of torture tests. Beyond that, I look at performance, apps, user interface, and so much more. Today, we're testing the Western Digital MyCloud PR4100.

Let's get the bad news out of the way. The Western Digital MyCloud PR4100 failed Test 1, drive failure discovery. When I put in the bad drive, the system hung.

Since it isn't possible to reliably simulate a drive failure with the drives in motion, I used a more structured test. I have, in my collection, a bad drive. It won't boot, can't be recognized by Windows, and is, not to put too fine a line on it, basically toast. It is the living embodiment of a drive gone bad.

This bad drive was used on each machine to simulate a drive failure. For each machine, I shut down the NAS being tested, removed the second drive, and replaced it with the dead drive. I then rebooted the NAS and waited to see what happened.

All the other NAS boxes eventually detected the bad drive. Not so much with the WD MyCloud. I waited 10 minutes, then 20 minutes. After an hour, there was still no visible indication on the machine, no buzzer, no email warning.

I powered the machine off, powered it back on, and I let the machine sit overnight. The next morning, it remained in its unresponsive state. The machine would not provide access to any other storage on the RAID. And the web interface would not respond.

I eventually removed the bad drive, installed my mismatched replacement drive, and rebooted the machine.

This brought me to Test 2, recovery to a mismatched drive. The WD performed flawlessly. Not only did it discover the new drive, it rebuilt the array automatically.

A few hours later, with pretty much no work on my part, the array was back in business. So while the machine hung on the failed drive, it was able to rebuild the RAID array to a replacement drive.

The MyCloud also passed Test 3, growing over time. When I pulled out the remaining two terabyte drive and dropped in a four terabyte drive, the WD machine didn't do an automatic rebuild. But after a visit to the web management environment and a few clicks, the RAID rebuilt. The added capacity was there for use.

Because the box crashed on a bad drive, rather than providing a graceful notification, the Western Digital MyCloud only gets three out of five stars for RAID performance.

Overall usability and performance was good, quite good. Although the QNAP had a little faster writing speeds, the WD was the fastest in aggregate read/write performance of all seven RAID devices I tested.

I also had absolutely no problem copying over my test directory from a Mac, and the device has a network recycle bin. The management interface isn't quite as sophisticated as some of the other devices, but it's clean and easy to use. Drives slide in without trays or tools, making physical drive management a breeze.

The machine is also quite cost effective, with a reasonable price-per-bay of $125. I didn't like that it needed a power brick, instead of a standard PC cable, but that's a minor complaint. The machine also lost some points because its app selection is quite limited compared to other contenders.

That said, the MyCloud earned four out of five usability and performance stars.

This is a nice machine, and if it hadn't completely failed the drive failure discovery test, it would have earned a better overall score.

Given that being able to discover and recover from failed drives is what you want a RAID to do, this machine did lose some points. That said, recovery from failure, once the bad drive was removed, was excellent, as was performance.

I would have preferred to give this machine a higher score, but I also want more original episodes of Firefly. Such is life. Overall, the Western Digital MyCloud PR4100 earns three stars out of five.

That's it for today. Stay tuned. We have three more NAS reviews coming, plus a wrap-up where I'll take you behind the scenes to discuss methodology and compare all seven devices side-by-side.