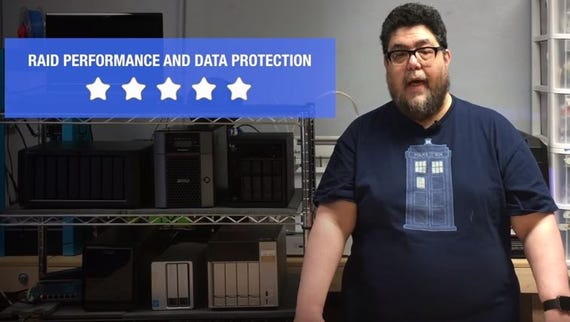 Welcome to ZDNet's DIY-IT project lab, where I'm stress-testing RAID devices for your entertainment and edification. In this article, we'll be looking at the first of seven NAS products to see how it performs.

I've subjected each candidate machine to a series of torture tests. Beyond that, I look at performance, apps, user interface, and so much more. This project has been huge. Actually doing real testing at the storage level has been incredibly time consuming. There was a point where I was concerned I'd never, ever finish. But here we are.

The benchmark case for all seven RAIDs is Drobo. When a drive goes bad with a Drobo, a big red light turns on. It's possible, from across the room, to see the status of the machine at a glance.

Since 2009, I've bought four Drobos, three that are directly attached to my main computer, and one Drobo 5N NAS, the predecessor to the device we're testing today. The ability to see the status of my Drobos just by walking into the room has proven invaluable.

By contrast, all of our 2017 test candidates now come with two Ethernet ports. Drives are also super easy to install. They don't require any trays, brackets, or screws. They just slide right in.

My successful experiences detecting and recovering from relatively rare drive failures with my older Drobos is my benchmark for this part of the test, so it comes as no surprise that the 5N2 passed both the failure discovery and notification tests with flying colors.

The Drobo has large LEDs you can see from across the room. You can also see, at a glance, overall array capacity due to the row of blue lights along the bottom of the unit. Drobo uses its own service for email notification, so you don't need to fight your ISP's SMTP forwarding rules.

After a replacement drive was inserted, the Drobo did an automatic rebuild of the replacement drive and reallocated storage to allow growth over time. Growth-over-time is a key test that not all the NAS boxes passed. The Drobo performed flawlessly.

For RAID performance and data protection, the Drobo earned a perfect 5 out of 5 stars.

It's difficult to compare prices on our seven NAS boxes because I was sent machines ranging from 2 to 8 bays. I decided to use a price-per-bay metric to determine how each machine compared to all the others.

Given the high quality fit and finish of the Drobo, I was surprised to find that it had the lowest price per bay, at almost exactly $100 each.

Other than the speed boost and the added Ethernet port, the new Drobo 5N2 is pretty much indistinguishable from the Drobo 5N I bought from Amazon back in 2014. While Drobos are very nicely designed units, the fact that the design hasn't changed much presents a problem.

Unlike every other NAS I tested, the Drobo doesn't provide a web interface. You have to install an application on your machine (which must be a Mac or Windows machine -- Linux users need not apply). 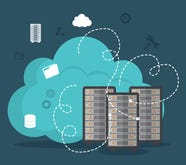 As more and more of our essential services move to the cloud, what remains on the small business LAN?

You even have to reboot your computer after installing the dashboard, which I suppose makes sense for the direct-attached Drobos but is entirely unnecessary to talk to a network device.

The Drobo dashboard offers far fewer bells and whistles than the other storage arrays. For example, you can't do anything with shares other than create them and assign permissions. Period. The Drobo also lost points because it doesn't offer a network recycle bin. If you delete a file on the Drobo NAS, it's gone.

In terms of apps, the Drobo is in the middle of pack. It has more apps than some of our contenders, but far fewer than Synology and QNAP. Also, some of the apps are rather odd to use.

For example, to use CrashPlan, you have to also install a CrashPlan controller app on another machine and hand edit its ini file to point to the Drobo. Every time CrashPlan updates, you have to go back in and re-edit that ini file. It's ugly, annoying, inconvenient, and unreliable.

As I mentioned earlier, read/write performance on the 5N2 was vastly superior to the earlier 5N. But compared to all the other NAS boxes I tested, it was near the bottom of the pack.

So where does that leave us? On one hand, fit and finish and the physical build is nearly perfect. On the other hand, the lack of a modern web interface, the lack of a network recycle bin, and the relatively low comparative performance resulted in a mediocre usability and performance rating of only three out of five stars.

That said, if you want a competitively-priced storage appliance where all you do is slide in drives and files are served, the Drobo is a win. Overall, the Drobo earned a four out of five stars.

That's it for today. Stay tuned. We have six more NAS reviews coming, plus a wrap-up where I'll take you behind the scenes to discuss methodology and compare all seven devices side-by-side.