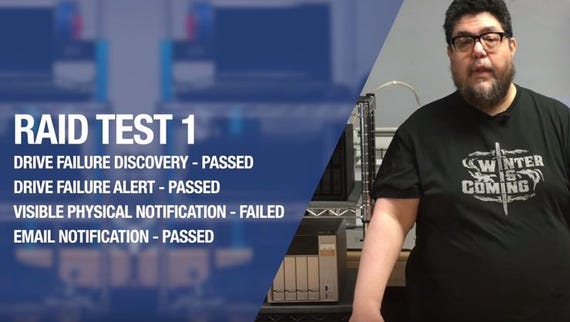 For the past few weeks, I've been stress testing RAID devices for your entertainment and edification. Today, we'll be looking at the third of seven NAS products to see how it performs.

I've subjected each candidate machine to a series of torture tests. Beyond that, I look at performance, apps, user interface, and so much more. Today, we're testing the QNAP TVS-473.

This is an impressive machine. The one caveat, and I'll get this over with up front, is that if you're a Mac user, you might want to give this machine a pass. The QNAP TVS-473 failed my Mac file system test, dying on copying over a representative directory of media and work files.

Other than that one failure, the QNAP is solid. It's unique compared to all the other NAS devices because it can also function as a standalone home media server. It's got an HDMI output and can directly drive a TV. You can even run a browser from the TV interface, giving you both huge storage and a media center PC, all in one box.

In terms of RAID performance, there's not much to say about it. It worked. It just worked. It flew through all of my torture tests. The QNAP device itself did not display any visible notification of failure, which was unfortunate, but it did send an email notification through a Gmail interface.

Drives slide into trays and don't require any tools to install. The trays have little plastic strips that hold the drives in. They're easy, if a bit fiddly, to use. But they're also a good place to expect things to break, because if they're not placed "just so" the little plastic pins that go into the screw holes on the drives could easily snap off. On the other hand, they're a lot more convenient to use than managing the teeny screws normally used to attach drives inside PC cases.

The management console worked fine. It quickly indicated a drive was out of service. Upon inserting a replacement drive, the QNAP automatically began a drive rebuild. It also resized capacity when the larger drive was added, which means it will grow with you over time.

The QNAP confidently rolls a RAID performance rating of four out of five. It would have gotten one additional star if it had a more visible physical failure indicator, like on the Drobo.

But where it beats the Drobo -- and all the other devices -- is in app selection. This bad boy has 108 add-on apps, beating even the Synology's quite extensive collection. Read/write performance was among best-in-show, and it sports a network recycle bin.

The management interface is sophisticated. If you're a storage wonk, you'll love all the options this device provides. The UI was a bit more cluttered and condensed than I would have liked, but that's a very minor complaint.

Pricing on this box is high, though. Using Amazon as a source for pricing, this thing costs $302 per bay. The only NAS in our series that's more expensive on a price-per-bay basis is the ioSafe, and that's built to withstand the White Walker invasion.

The lack of robust Mac file compatibility and the relatively high price cost it a few points, but its solid performance and app selection earned it quite a few points. In total, the QNAP earned four out of five usability and performance stars.

That's where the QNAP TVS-473 lands overall as well. Even though its silver and black look makes it seem like part of the set from a 1980s stereo commercial, it's a solid machine, well worth considering. A few minor complaints keep it out of the five-out-of-five club, but it wins a very respectable four-out-of-five. It's an impressive machine. As long as you're not a Mac user, you won't regret buying it.

That's it for today. Stay tuned. We have four more NAS reviews coming, plus a wrap-up where I'll take you behind the scenes to discuss methodology and compare all seven devices side-by-side.