With more than 20 years of published writings about technology, as well as industry stints as everything from a database developer to CTO, David Chernicoff has earned the term "veteran" in the technology world. Currently the principal of an independent consulting business and an active freelance writer, David has most recently been a Senior Contributing Editor for Windows IT Pro magazine, having also been the Lab Director for Windows NT Magazine, Technical Director of PC Week Labs, the author or co-author of a number of books on different versions of Windows, a plethora of eBooks on various technology topics, and of approximately 3000 magazine articles in print and on the web.

Earlier this month, NASA's Kennedy Space Center cut the ribbon, opening their new data center, designed to consolidate older facilities and to support multiple users within the NASA community. The consolidation is part of NASA's effort to meet the goal of the Federal government's data center consolidation efforts started in 2012. 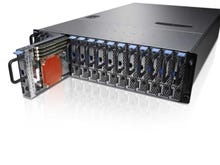 The new Kennedy Data Center, a 16,000 sq ft facility on the Kennedy Space Center campus, is replacing five legacy data centers, which occupied 45,000 sq ft of space. The new facility is not only more efficient than the five data centers it replaces, but also is capable of supporting significant growth in IT workload. Designed to be at least three times more efficient than the legacy data centers, it is expected to be able to take on additional work as the demand for its services grows.

Initially, the new data center replaces is hosting the projects and services for the Ground Systems Development and Operations Program, the Commercial Crew Program, the Launch Services Program, and Kennedy's research and technology projects, among others.

The facility is also in process for certification as a LEED Silver building, and while not certified as such, was built to meet the Uptime Institute's Tier II standard.

The new facility is part of the first phase of construction in the Space Center's new central campus and its construction is enabling space to be made available as it makes older buildings redundant. For example, the Central Instrumentation Facility, a 136,000 sq ft building that was constructed in the Apollo era, spent decades as the hub of instrumentation and data processing operations, is now scheduled to be demolished, as the new data center facility takes over its remaining responsibilities.