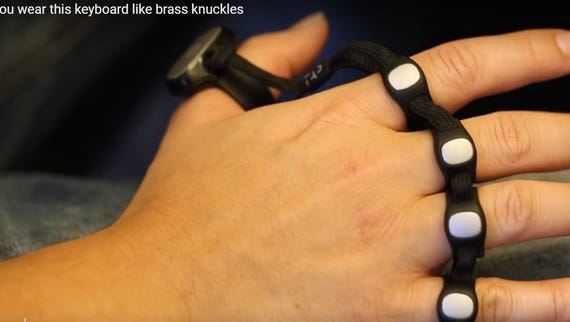 You wear this keyboard like brass knuckles (CNET)
Watch Now

If one traces the evolution of personal computing through the development of laptops and to today's smartphones and tablets, one finds that the essence of that original desktop experience is still intact in many ways. We still receive information from a screen and we still tap onto a dedicated keyboard even if it has been integrated into the display. However, a number of companies are pioneering input options that require nothing more than a surface within Bluetooth range to produce text and graphics for today's screens and what may lie ahead. 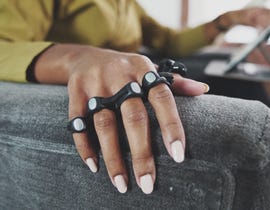 At the launch of the iPhone, Steve Jobs famously rebuked styli in favor of finger control. Smart pens never really went away, though. Paper-based systems -- such as those from Livescribe and, more recently, Mokeskine -- have been met with an uptick of highly accurate first-party companion pens for Microsoft Surfaces and Pads.

Read also: Getting started with Alexa and smart home tech for under $100

But in this battle between paper and screen, why choose sides? Luidia, which sells a range of products for tasks such as turning whiteboards into smart boards, recently began delivering the Indiegogo rewards for its eBeam Smartpen. Similar to a device it launched in 2015, the Smartpen now comes with a tip that requires no need for paper or a screen, allowing one to capture, record, or even stream words or drawings. Users can share a link that even allows viewers to add their own notes or drawings to the document.

Luidia's offering is neither the first nor most independently functioning crowdfunded smart pen to break free of paper. OmTech's Phree did not require the companion-sensing brick that Luidia's product does. It raised over $1.5 million on Kickstarter and Indiegogo in 2016 at a preorder price of just under $200. However, the company hasn't delivered the product, claiming it needs additional investment in order to move forward on production. While many backers have understandably (and futilely) requested a refund, the company has continued to keep communication open, updating backers just last month and in January before that.

If the Smartpen represents the movement of pens from paper to a surface-free future, Tap represents that journey for the keyboard. The unique wearable set of five adjoined flexible rings is available in small and big sizes. As one strikes a flat surface with fingers, the rings act as a chording keyboard, allowing the production of characters with different combinations of fingers involved in the tap.

Some of these are easy to remember. For example, the five vowels correspond to a tap of the finger. A "Y" is created by tapping the thumb and pinky together, simulating the top of the letter, while a "W" brings the middle finger into the act to represent the three peaks of that letter. Other characters make more sense only as counterparts to more intuitive ones. For example, an "M," representing an upside down "W," is made by tapping the second and fourth finger, i.e., the opposite of the first, third, and fifth number.

Others, however, require a bit more creativity to visualize. The "H" is made by tapping all fingers except the thumb, while the "R" is all fingers except the pinky. And then there are characters such as the comma, which requires double-tapping an "M" gesture as well as more exotic machinations, some of which may stretch the limits of your hand's dexterity. Fortunately, for some of those have alternate versions available. For example, a "J" requires tapping all four fingers except the fourth finger, but an alternative to this potentially awkward option is double-tapping the middle finger responsible for "I" in a single tap. The Tap device also can enter a mouse mode that seems to be particularly awkward.

Using Tap is fun but, even with practice, it can't compete with the speed a competent touch typist can get out of a keyboard. That said, Tap represents a more mobile option to even portable keyboards and Tap's inventor, David Schick, notes that the odd device has won fans among some individuals with physical disabilities. And his long-term confidence in the device's potential goes far beyond that. He predicts that solutions such as Tap will become necessary as we move away from displays to new modes of interaction such as augmented reality.

Indeed, just as traditional inputs means such as keyboards and paper are being sidestepped, so are traditional displays. That's a topic I address in this column.

This wearable turns your fingers into a Bluetooth keyboard

https://www.cnet.com/news/this-wearable-tap-turns-your-fingers-into-a-bluetooth-keyboard/Tap offers a new way to hammer out text messages and emails on your phone.

Hands-on with the Neo N2 smartpen

https://www.cnet.com/news/hands-on-with-the-neo-n2-smartpen/This Kickstarter phenom, which digitizes handwritten notes directly to your phone or tablet, looks and feels like a traditional pen -- but is it markedly better than the competition?