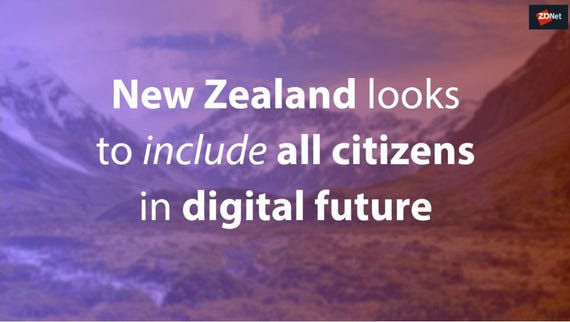 The New Zealand government has released guidelines for how to include all citizens in a digital future, focusing on making sure all citizens can conveniently and confidently access and use digital devices and the internet.

It is expected the blueprint will be used to coordinate the planning of different government and community initiatives, and identify where future investment and action is needed.

Under motivation, the government wants to understand how the internet and digital technology can help people connect, learn, or access opportunities, and consequently have a meaningful reason to engage with the digital world.

Having access to affordable digital devices, services, software, and content that meet citizen needs as well as being able to connect to the internet where individuals work, live, and play is also a key element of its strategy.

"Access is a broad element, which can be broken into three key parts: connectivity, affordability and accessibility," the blueprint explains.

Where skills are concerned, it has been highlighted by the blueprint that having the know-how to use the internet and digital technology in ways that are appropriate and beneficial for everyone is important.

Lastly, trust in the internet and online services, as well as having the digital literacy to manage personal information and understand and avoid scams, harmful communication, and misleading information is an element of the plan that also touches on online safety and digital understanding.

For the purposes of the blueprint, being digitally included means having convenient access to, and the ability to confidently use, the internet through devices such as computers, smartphones, and tablets.

The blueprint focuses on enabling non-users and sporadic users of the internet to become users, rather than on upskilling people who already access and use the internet in their day-to-day lives.

"Digital inclusion in Aotearoa needs to support the aspirations and culture of tāngata whenua in a digital world, both collectively and as individuals," the blueprint says.

According to government chief digital officer Paul James, government has many roles to play in digital inclusion, including in "leading, connecting, supporting, and delivering to ensure everyone can participate in, contribute to, and benefit from the digital world".

In addition to making services more accessible for those who aren't online, James said it's important to join up the many government initiatives that address aspects of digital inclusion.

"We will look outside government as well, collaborating with communities across New Zealand and the many iwi, hapū, non-governmental organisations, businesses, and charities already making important contributions toward a more inclusive and innovative digital nation," James continued in the report's foreword.

"Because digital inclusion doesn't exist in a void, we must link in closely with other initiatives, including work on the digital economy, digital rights, data sovereignty, and the future of work. It's important that we learn from each other, so all New Zealanders thrive in this digital era."

As there are no agreed measures for digital inclusion in New Zealand or a reliable, comprehensive data that provides a full picture of who is not digitally included, the Department of Internal Affairs Te Tari Taiwhenua is leading work on an "outcomes and measurement framework for digital inclusion", with a draft due to be released in early 2019.

The framework will be based around the four elements of digital inclusion and line up with the Treasury's Living Standards Framework.

Marketplace.govt.nz will go live next month, around the same time the country's government will announce its new CTO.

The council-owned entity is looking to put its data to good use, embarking on a project with US-based Machine Zone to 'gamify' public transport.

The 'stocktake' is aiming to ensure government agencies are performing analytics on citizen data in a transparent and fair manner.