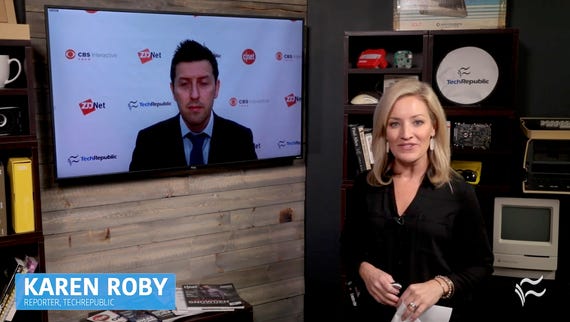 The UK technology industry has never quite been convinced about the benefits of the United Kingdom leaving the European Union.

But with little under five months before 'Brexit' is supposed to formally happen, Dominic Raab, Secretary of State for Exiting the European Union, spoke to start-ups and tech companies at a Tech Nation town hall event in North London, in a bid to showcase the opportunities Brexit presents.

He opened by declaring the technology industry is "delivering the jobs of the future" and is "one of the huge drivers of innovation and productivity" in the UK. Raab -- who was a leading campaigner for Britain leaving the European Union -- then argued that Brexit is going to bring increased opportunities for UK tech.

"My overarching message is we're pursuing a global Brexit, an open and outward-looking Brexit and I think, above all, a pro-tech Brexit, because we really see that your sector is really part of the fabric of this country's future," he said.

Currently, there's no final agreement on what's going to happen when the UK departs the EU, but Raab assured the audience that the government understood how important it was for data to continue to flow freely between the UK and the EU.

"What we've got is a series of proposals and grounds for an agreement with the EU which will set-out straightforwardly how that data will be protected through UK law," he said referring to a document published by the government - although if the EU will agree to the proposals has yet to be seen.

"Those provisions will mean that business won't really have to do much at all. You can leave it to the government and the EU to make sure you've got a smooth run at it. And for your clients and the average citizen, they'll know their data will be protected," Raab added.

One key area the technology industry is concerned about is recruitment and access to skills. While the government has reassured those from EU countries living in the UK that nothing will change following Brexit, there are already some Europeans who've decided to pack up and leave because they can't face the uncertainty.

"While government can make noise, individuals act on the reality around them," said Etienne Greeff, CTO and co-founder of SecureData.

"EU nationals currently have no clarity about their status beyond Brexit. When you are making decisions around schools for children and settling down you want certainty above all, and we currently don't have any. We have already had instances of individuals deciding to return to the EU as a result."

However, the Brexit minister repeatedly spoke about an over-reliance on European talent and how the UK now has the opportunity to open itself to people from across the world. Despite his assurances, he didn't address how this new immigration system would work, only stating that a white paper would be released "soon".

"I think there's something to be said for moving from an immigration system which is overly focused on freedom of movement from the EU, to saying we have a global talent pool, let's say we're open to getting talent from across the world," said Raab, who also added "When it comes to recruiting top talent for the tech sector, that won't be a problem".

That optimism stands in stark contrast to views expressed by some tech recruiters, who expect Brexit to discourage people and organisations from wanting to do business in the UK.

"It's been over two years since the UK voted to leave the EU and the warning signs have not been positive. I don't think Brexit brings any positives to the recruitment sector at all, as we will see an increase in skills shortages and many UK companies may choose to relocate," said Spencer Symmons, managing director at CPS group, a specialist IT recruiter.

Describing how CPS has spoken to clients about moving talent to Dublin or Amsterdam due to fears about the impact of Brexit, Symmons said: "The complexities of this are endless and time consuming regardless of whether or not we achieve a Brexit deal before March, and the uncertainty of that is not helping us to prepare as an industry".

"Raab's comments that recruiting top talent won't be a problem are totally misguided," he added.

The Brexit minister also used his Tech Nation speech to shine a light on some UK technology success stories, with Raab detailing work in artificial intelligence as one of the unique selling points of what Britain can offer.

Some are willing to give Raab and his vision of Brexit a chance -- but still have concerns about how even the biggest success stories will be affected by what happens in future.

"Despite Brexit Secretary Dominic Raab telling a TechNation audience last night that leaving the EU could create opportunities for the UK technology sector, it remains a huge concern that the UK may lose its position as Europe's leading hub for technology talent post-Brexit," said Robbie Clutton, senior director at Pivotal Labs.

READ MORE ON TECH AND BREXIT

Join Discussion for: 'No clarity', 'misguided' and 'a huge concern':...