Yup folks. There aren't a lot of original ideas left in the smartphone market. So let's go all Converse Chuck Taylor retro and see what sticks. Welcome back Nokia and BlackBerry.
Written by Larry Dignan on Feb. 27, 2017

We're entering the retro phase of the smartphone industry as the early news out of Mobile World Congress 2017 revolves around brands BlackBerry, Moto, and Nokia.

All three of these brands -- largely historical footnotes for being trucked by Apple's iPhone -- are coming back in different forms under new manufacturing arrangements, brand licenses, and approaches.

Will the BlackBerry KEYone, Nokia lineup (Nokia 6, 5, 3 and 3310 do-over) and Moto G5 fare well? Sure why not? The retro movement at MWC also coincides with a rather boring innovation phase in the smartphone industry.

And if you really want insight on how BlackBerry, Nokia, and Moto will do look no farther than sneakers. Are these new-old phones any different than Converse Chuck Taylors?

Converse used to be a powerhouse footwear brand. Then Nike came along. Then Nike bought Converse. And now Chuck Taylors look no different than they did in the 1970s and 1980s, but are fashion staples.

The latest from CNET at MWC | ZDNet: Nokia kicks off MWC with a 5G launch for carriers that want to be ahead of the pack | HP unwraps new accessories for Pro x2 detachable PCs | Beyond the shiny smartphones: What to really watch for at MWC 2017

BlackBerry phones are made under a licensing arrangement with TCL, which manufactures Alcatel phones too. Nokia's return to the smartphone market is due to a manufacturing deal with HMD Global. The Moto brand is a special case in that it's a retro brand that was its own company, sold to Google and then to Lenovo. Frankly, Lenovo is attaching its scale, trying to be efficient in the smartphone market and Moto is simply a sub-brand. Nevertheless, there's always a retro vibe to Moto even if the brand offers great value.

What remains to be seen is whether BlackBerry, Nokia and Moto recapture any of their past glories. Sure LG's G6 is the headliner at MWC, but you can't avoid the retro possibilities here.

If I'm going to place my bets, I have to go with Nokia as having the best prospects of the retro bunch. Nokia's smartphone brand remains strong in many parts of the world and now it'll run Android, so the devices could find an audience. Nokia's worst turn was betting on Windows Phone (at least the business was unloaded to Microsoft later after the inevitable cratering).

What's next? You just wait. That Palm Treo launch at MWC 2018 is going to rock.

CNET Video: The Nokia 3310 is back and so is Snake 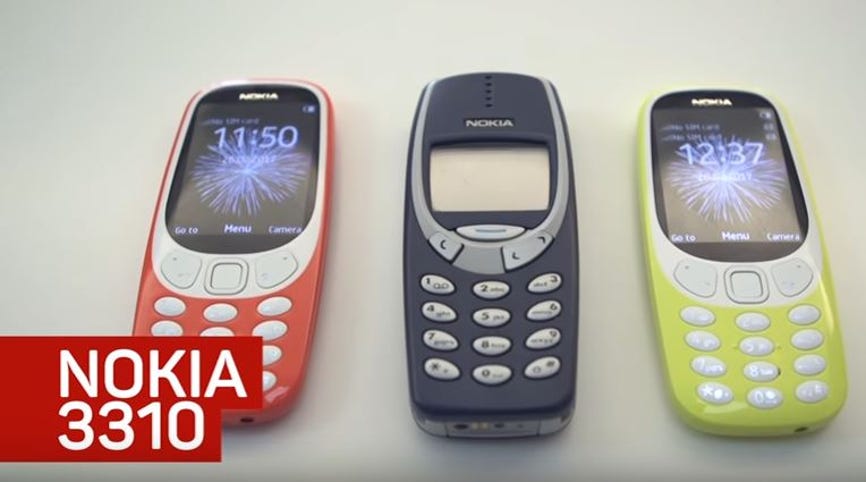