The Nokia mobile brand has been revived by HMD Global at this year's MWC.
Written by Jo Best, Contributor on Feb. 27, 2017

The MWC trade show in Barcelona is the event where the smartphone industry shows off its latest innovations. This year, however, one of the biggest stories from the show has a distinctly retro feel: the launch of a new range of Nokia smartphones.

Yup folks. There aren't a lot of original ideas left in the smartphone market. So let's go all Converse Chuck Taylor retro and see what sticks.

The Nokia 3 is a five-inch device priced at €139, which sports 2GB of RAM, 16GB of storage, a quad-core processor, and front and rear eight-megapixel cameras.

The Nokia 5 meanwhile comes with a Qualcomm Snapdragon 430 processor, a 5.2-inch IPS HD display, 2GB of RAM, 16GB of storage, a 13-megapixel front facing camera, an eight-megapixel rear equivalent, and a €189 price tag.

There will be two versions of the 5.5-inch full HD Nokia 6. The standard issue version comes with dual speakers and Dolby Atmos tech, 3GB of RAM, and 32GB of storage, while the Arte Black has a bump in storage and RAM at 64GB and 4GB respectively, and an extra €70 on the cost. Both have a 16-megapixel camera for rear shooting, and an eight-megapixel for selfies.

The Nokia 5 and 6 have an aluminum unibody design, while the Nokia 3 has a polycarbonate back. All will come with a headset and charger in the box, along with Wi-Fi as well as LTE 4G connectivity.

The devices all run 'pure' Android Nougat with Google Services -- that is, free of custom skins and bloatware -- and will get security updates monthly. All will also get Google Assistant.

"A true Nokia soul in our devices, you will sense it," Arto Nummela, CEO of HMD Global said today at MWC.

The aim of the new handsets, according to HMD Global, is to give buyers "everything you always loved about Nokia in a modern form".

Alongside the three Android smartphones, HMD Global has unveiled one feature phone: harking back to Nokia's glory days, it will be called the 3310. The original 3310 was launched at the turn of the millennium, a candy bar with the then-cutting-edge inclusion of text chat. It was known for having a long battery life and for featuring the addictive game Snake.

The reboot of the 3310 has more of the same: very similar design to its predecessor, as well as a battery that can last a month, a 2.4-inch screen, a two-megapixel camera -- and even Snake too. It comes in four colours and will be available as both a single SIM and dual SIM variant, at a cost of around €49 depending on geography. There's no Android on the 3310 though -- it will run on the Nokia Series 30+ operating system.

The last time Nokia devices were released at MWC was in 2014, when the Nokia X range debuted. The three X devices ran Android and were announced by Steven Elop, then CEO of Nokia Devices. It was hoped the three mid-range handsets would act as a gateway for buyers to Microsoft services, but the range was canned a few months later.

Nokia, you'll remember, used to be the biggest smartphone seller in the world, until it faltered under increasing competition from newer, more hip smartphone players like Apple and Samsung. After an attempt to make up lost ground by switching to Microsoft's Windows Phone OS didn't work out, its phone-making arm was sold to Redmond for €5.4bn. Not long after the acquisition, Microsoft largely jettisoned the the mobile business, writing off the Nokia investment and saying it would only be making a handful of devices in future.

Now, thanks to a clause allowing Nokia to reenter the mobile market a couple of years post the Microsoft sale, the Finnish company's logo will once again be gracing mobile phones the world over. Nokia, however, won't be making the phones itself: it signed a licensing deal with fellow Finnish company HMD Global, which will design, market and sell the devices. Foxconn, which also makes phones for Apple, will do the manufacturing.

While Nokia won't be involved in the production or retailing of the handsets, HMD will still have to meet Nokia's brand guidelines for any products it releases, and there's still a dialogue between the pair: "The relationship is quite clinical. There is a set of requirements that we have to meet, but for us it's far higher," Florian Seiche, HMD Global's president, said.

The one-time market leaders get a new lease on life with the help of Android, licensees and Chinese manufacturing.

The devices launched at MWC today aren't the first Nokia-branded phone from HMD Global: it unveiled the Nokia 6 in China in January. Like the rest of the Nokia range, the Nokia 6 will now be released worldwide. While there's no word yet on which of the devices will be launched when, HMD Global has confirmed that there will be a US release and the phones will be making their way to various markets from the second quarter of this year.

In its short life (it was formed in 2016), HMD Global has also dipped its toe in the feature phone business, launching a Nokia 'dumb phone', the 150, in September. Like the 3310, the 150 boasted a long battery life -- this time 25 days -- and Snake. HMD Global teamed up with Foxconn to buy the feature phone business Microsoft sold off last year -- part of the devices unit Redmond purchased from Nokia under the 2014 deal.

While much about HMD Global's smartphone strategy will seem familiar to anyone who followed Nokia and Microsoft's mobile moves, HMD will be hoping to leave history behind when it comes to its product line: Nokia was traditionally strong in both cheap, low-end feature phones and high-end smartphone products; the mid-range, however, was its weak point.

Nokia 6 is pure Android Nougat in a sleek aluminium body 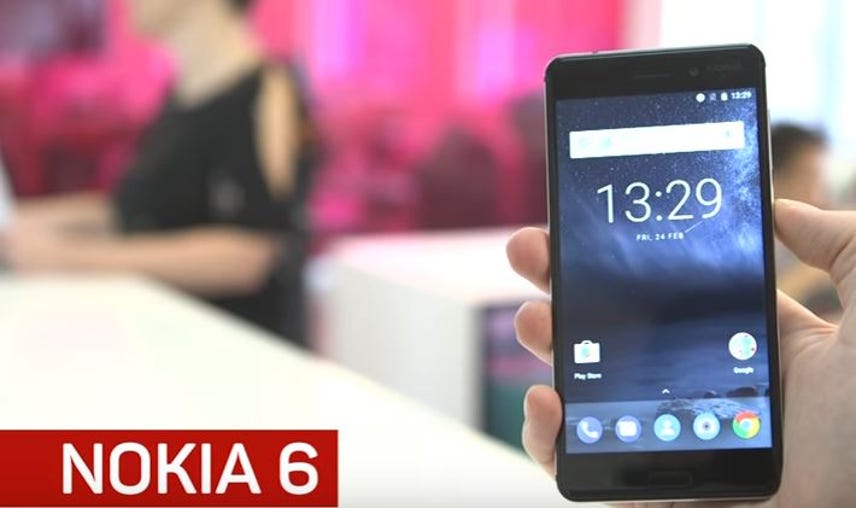 The mid-range is exactly where HMD Global is aiming its devices: the €100 to €200 price range that it's targeting, the company says, accounts for 50 percent of all mobile sales. While that gives HMD a large addressable market, it also puts it head-to-head with a lot of competition.

However, that doesn't mean that it's ruled out a return to the high end one day: "Our ambition is to be one of the leading players in the next three to five years... we recognise that this is the first wave of our portfolio that we're showing. With the Nokia brand, that can stretch from a €20 feature phone to a €700-€800. We have the brand that supports that," said Seiche.