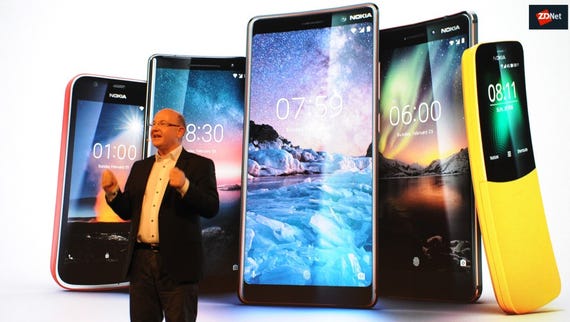 Nokia 8110 'Matrix' slider is back with added 4G
Watch Now

The fingerprint sensor has been moved from the bottom front to the rear to make space for the larger screen. It's powered by a 2.0 GHz MediaTek Helio P18 eight-core processor that HMD Global says is 40 percent faster than the Nokia 5.

The Nokia 5.1 joins HMD Global's other Android One range of "pure" Android, including the Nokia 8 Sirocco, Nokia 7 plus and Nokia 6.1.

Android One phones are guaranteed to receive three years of monthly security patches and two years of OS updates.

The Nokia 3 apparently has been HMD Global's best-selling Android phone to date. The Nokia 3.1, also an Android One phone, has a 5.2-inch display in an 18:9 screen ratio, with a 13MP rear camera and 8MP front camera.

It's powered by a MediaTek 6750 eight-core chipset and features a gyroscope for playing AR games like Pokémon Go.

The Nokia 2.1 comes with the Go edition of Android Oreo made for devices with 1GB or less of memory. The device features a 5.5-inch HD screen in a 16:9 aspect ratio and comes with a large 4,000mAh battery.

This phone runs on Qualcomm's Snapdragon 425, with 8GB storage, and comes with an 8MP rear camera and 5MP front camera. It will be available from July for around $115.

HMD Global hasn't mentioned which markets the phone will be released in, but gave pricing for the two Android One devices in euros and the Nokia 2.1 in US dollars.

All three phones will be receiving Android P when it's released later this year, according to HMD Global.