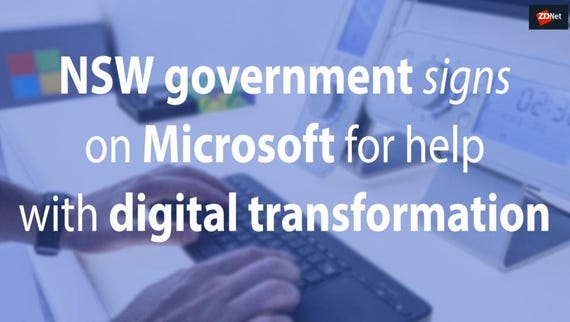 The New South Wales government's Department of Finance, Services, and Innovation (DFSI) has announced the signing of a memorandum of understanding (MOU) with Microsoft Australia.

It is expected the MOU will "kick-start" brainstorming sessions, with the intention of progressing digital transformation across state government departments and the public service.

"If we are really going to achieve our ambition of transforming the citizen's experience with government, we need to work across agencies ... across NGOs, across research organisations," NSW government chief information and digital officer Greg Wells told journalists on Tuesday.

"We try to make sure the collaboration with industry is really solid."

Wells said the state government's approach has been to pick a handful of tech-related areas where there is mutual benefit to both NSW and Microsoft, such as platforms, how government departments migrate to the cloud, the ethical use of artificial intelligence (AI), data sharing, and "definitely" cyber.

A traineeship program also falls under the MOU.

"There's specific training around Azure that we want to look at, but also more generally with public servants it's something we genuinely need to address, is how do we skill public servants up to think about things differently," he said.

"Thinking about the programs that have been successful that we're working on right now, [Department of] Justice with Life Journeys ... bringing people out of Justice to sit with policy people, digital people, data people, to work together is not a natural -- not something public servants generally know how to do, or have done before."

He said using Microsoft skills and technologies is one way to achieve that.

"If there was a group of business people that have come from the front line, that have been in a program, and there was a pool of those people across government, we would do a lot better, because there's only a few of those people now, but the discussion we're having with the Public Service Commissioners is how do we build up leadership programs, get those people onto programs -- I think you need to experience it," Wells continued.

"You can teach, train, and do modules all you want, but I think you need to do that as well as get people onto programs.

"If I've got a pool of those people that can go onto the next transformations ... I think that's a real practical thing."

Wells was tight-lipped on how many staff members would be sent through training, but as part of the MOU, NSW department leads will be brought into the tech giant's new Microsoft Technology Centre (MTC) in Sydney to explore how government services and operations could be transformed by technology.

The appeal of working with Microsoft, according to Wells, is the partner ecosystem the company has in Australia.

Wells said the government has also been speaking with Data61 about the ethical use of AI.

Microsoft Australia MD Steven Worrall told ZDNet there are plans to work with other governments in the country on similar initiatives.

"There are plans and conversations; just not at this level ... I would suggest our relationship with NSW has matured to the point where we are today, which is exciting," he explained. "It's fair to say we are having conversations with federal and state about similar relationships with other announcements to make down the track."

The NSW Data Analytics Centre is using Azure to build a machine learning neural network to categorise how the state is spending its AU$30 billion procurement kitty.

Digital transformation in NSW kicks off after minister's frustration at processes

Five state government departments will gain access to Microsoft Office 365 and the tech giant's other cloud and mobility services under the deal.

For SMBs, deploying a secure, integrated, and mobile collaborative working environment that doesn't break the bank is nearly impossible. Microsoft 365 is designed to make it not only possible, but easy.

Join Discussion for: NSW government signs on Microsoft for help...