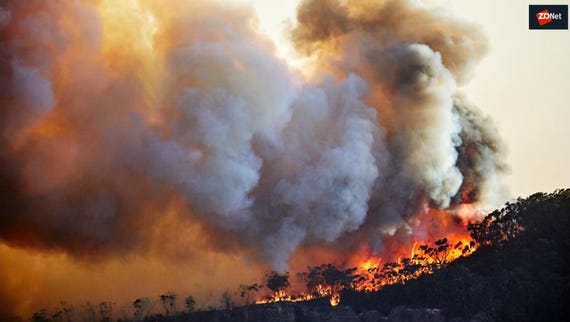 The New South Wales government has announced it will be investigating how artificial intelligence, combined with data from satellites and local sensor networks, can be used to help speed up bushfire detection and predict fire behaviour.

The research will be part of the 2020 Bushfire Data Quest, a week-long online sprint event that will see participation from universities, research institutes, philanthropy, and technology companies.

"Predicting the behaviour of bushfires is a hugely difficult problem, made more complicated by a myriad of factors such as fuel load, atmospheric conditions, soil moisture, and availability of water," he said.

"Using data from satellites is a great advancement on the tools we have traditionally used with much of the task of planning on-the-ground bushfire response relying on the experience and instincts of fire-fighters -- who are often volunteers.

"We are investigating further how we use the data from multiple satellites and local sensor networks to create algorithms that will help detect fires earlier, predict fire behaviour, and help emergency services respond more effectively to protect homes, people and nature."

The challenge is being carried out in partnership with the Minderoo Foundation wildlife and disaster resilience program, which aims to deliver a plan on how Australia and the rest of the world can prevent, mitigate, and defeat bushfires.

The Minderoo Foundation program is currently being overseen by Adrian Turner, former CEO of the Commonwealth Scientific and Industrial Research Organisation's (CSIRO) Data61. He explained earlier this year how as part of developing a fire disaster strategy, new technologies would be piloted to help map where fires are likely to start and when they are most likely to occur, for instance.

"Ultimately, we may get to a place where we have unmanned vehicles dropping new types of fire retardants.

"If we could make all that work, you could imagine a new type of infrastructure that could find and extinguish a fire within hours, and the threat of fire gets removed as a threat in urban and regional environments."

Under the contract, Siemens will introduce a new traffic management system (TMS) that will be in operation by 2023.

Traditionally, the train service planning system has been based on a timetable planned in advance and if any changes were to occur on the day, it would be managed manually by controllers. But the TMS now enables the timetable to be managed in real-time, allowing controllers to respond quickly to any disruptions.

The new TMS will be used to monitor train services and will work alongside the advanced train running indication and control system that is currently used by Sydney Trains to manage network operations.

"This is an important step in the process of upgrading our network with internationally proven technology that boosts safety, capacity, reliability, and enhances the customer experience," he said.

Replacing the existing system with the TMS is part of the state government's digital systems program, aimed to replace legacy train systems with modern technology.

Under this program, the state government will also be replacing traditional trackside signally equipment with "in cab" train control technology. This will enable train drivers to receive digital signal information in the train cab, instead of looking at fixed traffic light lineside signals.

The digital systems program will initially be deployed to two sections of the T4 Line from Sutherland to Cronulla and from Bondi Junction to Redfern.

Plans to deploy the digital system to other parts of Sydney's rail network is currently underway, the state government said.

Join Discussion for: NSW government taps into AI and satellite...