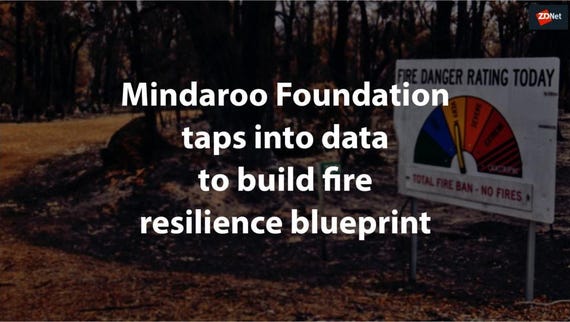 Accessing and sharing structured data will play a crucial role when it comes to developing Australia's blueprint for fire resilience, according to Adrian Turner.

Turner, who was formerly chief executive of the Commonwealth Scientific and Industrial Research Organisation's (CSIRO) Data61, is currently charged with leading the AU$50 million Minderoo Foundation wildlife and disaster resilience program that aims to deliver a plan on how Australia and the rest of the world can prevent, mitigate, and defeat bushfires.

Speaking during a Dataminr webinar last week, Turner explained how data is being explored as a key element of enhancing disaster prediction in the future.

"Being able to look further ahead to get a more complete picture of potential risks, to be able to make better decisions ahead of time, and then to respond, so when something does happen, how do we speed up the response? And for us, it will involve what we're calling a resilient data collective and getting more structured data available to the world around natural disasters," he said.

"Being able to access structured data is fundamental to probabilistic decision making."

See also: The Internet of Wild Things: Technology and the battle against biodiversity loss and climate change (TechRepublic)

In addition, Turner explained how as part of developing a strategy, new technologies would be piloted to help map where fires are likely to start and when they are most likely to occur, for instance.

"Ultimately, we may get to a place where we have unmanned vehicles dropping new types of fire retardants.

"If we could make all that work, you could imagine a new type of infrastructure that could find and extinguish a fire within hours, and the threat of fire gets removed as a threat in urban and regional environments."

Aside from using data to enhance predictions and response, Turner said the blueprint development would also involve thinking about how the learned data could be applied in the real world.

"How do you incent people? How do you educate people ahead of time, so that when a crisis does, they're prepared and there's also some less risk in the human response to the disaster?" he said.

Join Discussion for: Mindaroo Foundation taps into data to build...